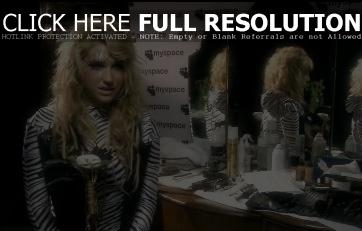 Highlights of Ke$ha’s her MySpace Release Show in London, England the other night have been posted online. The ‘Tik Tok’ singer talked about what she liked about being in the city.

“I love London,” Kesha Sebert said. “I’ve been here a few times. I wrote part of my record in London, so I’m kind of obsessed and I don’t really want to leave, because you guys have the best babes, and the best trannies, and I love the accent, and you guys all dress really well, and you’re all really hot.”

She also talked about her love for animals, which inspired her debut album to be titled ‘Animal’.

Watch the comments and footage from her show below.