Kelly Clarkson Interview & ‘Because Of You’ Performance On Radio 538 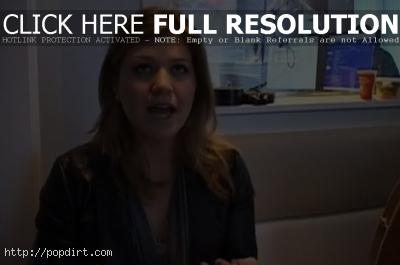 Radio 538 welcomed Kelly Clarkson in the studio for an interview while visiting Holland promoting her new album, where the ‘American Idol’ season one champ answered some listener questions.

Clarkson was asked about who her life would suck without, the favorite song off ‘All I Ever Wanted’, the Katy Perry co-written songs on the album, wanting to work with Adele, the origin of her “Smelly Kelly” nickname, what comes to mind when she thinks of Holland, and when she’ll be performing in the country on tour. Clarkson then performed ‘Because of You’.

On her favorite album track, Kelly said, “I think my favorite song at the moment, it changes all the time, I like ‘If I Can’t Have You’. It’s kind of dance and it’s kind of sexy, so I kind of dig that.”

Asked if Katy Perry, who wrote ‘I Do Not Hook Up’ and ‘Long Shot’, approached her, Clarkson said, “No, Katy did not approach me. We’ve met a couple of times, but we didn’t actually work together in the studio. She wrote ‘I Do Not Hook Up’ with a writer friend of mine, Kara Dioguardi, and ‘Long Shot’ with Glen Ballard and some other writers. They’re just awesome songs, so I put them on the record because she didn’t want them for hers. I hope you like them.”

Watch the interview and performance below.