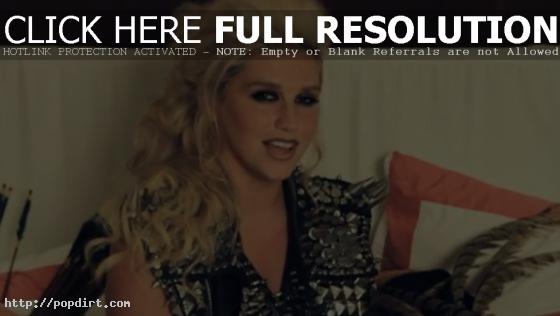 Galey, Baggs & Charli of the Gold Coast’s 90.9 Sea FM spoke with Kesha “Ke$ha” Sebert during the singer’s promo trip in Australia recently. Kesha discussed her desire to live in Australia, music she’s listening to lately, getting nerves performing on TV shows, helping young contestants on reality television shows, her favorite songs off ‘Warrior’, teaming up with Iggy Pop on ‘Dirty Love’ and ended up with a rapid fire Q&A.

As for chances to help other artists going on singing competition TV shows, Kesha said, “It’s just amazing to be able to help other girls or boys try to realize their dreams. I’ve been in that position when I was younger and a lot of these kids are really young like a 14-year-old, I think her name is Cheyenne, but I wish someone would have helped me when I was fourteen, I was just clueless, so I take it really seriously. It’s amazing to try and help somebody and give them a little bit of guidance to help them realize their dreams.”

Asked about her favorite track on her new album ‘Warrior’, Kesha said, “I have a lot. I’ve been working on this record for like a year, so they’re all like my babies, but there’s one song ‘Love Into the Light’, which is kind of my song which is about how we should all love one another and accept each other for our imperfections. There’s another song called ‘Dirty Love’ that I did with Iggy Pop that’s all about sex, so there’s the sentimental song, ‘Love Into the Light’, really special, and then there’s ‘Dirty Love’, that’s just wild.”

Asked about Iggy Pop, Kesha enthused, “He’s just the coolest human on the planet. He looks so cool. I came into the studio and he just did not have a shirt on, and I was so happy. I couldn’t wipe a smile off my face. He’s so epic.”