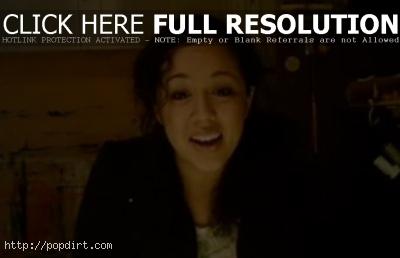 Kina Grannis checked in with fans on her YouTube channel after winning the Doritos contest and having a clip of her ‘Message From Your Heart’ performance aired during the Super Bowl on Sunday and getting a record deal with Interscope.

She writes, “Thanks to all of your help and support – I did it!! My music video aired yesterday after the first quarter of the Super Bowl… and much crying and craziness ensued. I can’t express how truly bizarre this all is. But it is amazing.”

“Yesterday was the craziest day ever,” Kina said in the video. “I would have posted yesterday but I would have been crying constantly and very unattractive, not that I’m attractive now, but I look better than yesterday at least. This whole week was really crazy. Doritos brought us out to Phoenix, me and the other two finalists, Landon Austin and Nivla Named. We did some press things. It was really fun. I got to know the guys really well. They’re all amazing people.”

Watch her message below.

February 4, 2008 – Kina Grannis from Mission Viejo, California, a Doritos Crash The Super Bowl finalist, performed ‘Message From Your Heart’ for Doritos Super Bowl commercial. The clip refers viewers to buy the song on iTunes and vote at SnackStrongProductions.com, where the artist with the most votes wins a recording contract and the opportunity to perform their song in front of nearly 100 million viewers during the Super Bowl. Watch the commercial, as well as Grannis’ video for ‘Message From Your Heart’, below.