KT Tunstall On Being Covered By ‘Idol’ Katharine McPhee

KT Tunstall spoke with People magazine about Katharine McPhee covering her song ‘Black Horse and the Cherry Tree’ on ‘American Idol’. “It was so crazy seeing that,” she said. “She just looked like she was having a really good time. It was really cool that she did something different.” As for her opinion of ‘Idol’, the 30-year-old said, “It’s a great TV show, but it’s not amazing music to me. It’s kind of like watching karaoke. It’s not the same as spending 10 years to try to get somewhere as a musician like I did.”

Elliott Yamin On Life After ‘Idol’ 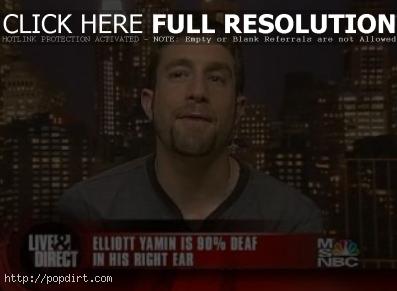 June 4, 2006 – ‘Live & Direct’ host Rita Cosby spoke with Elliott Yamin about life after ‘American Idol’ and possible recording contracts. Another popular ‘Idol’ finalist, Ace Young, surprised Elliott with a phone call. Video of the interview at Bing.com has since been removed.

June 1, 2006 – Though ‘American Idol’ season five champ Taylor Hicks admits that he sometimes spent Tuesday night after the show at Burger King voting for himself, he also cast a few for his competitors. “I’d vote on the performance as opposed to who I liked as an artist,” he tells Rolling Stone. “I voted for Elliot [Yamin], for Chris [Daughtry] a couple of times, for Katharine [McPhee]. It was funny because we’d be in the apartment or somewhere and I’m like, ‘I’m voting for you, you know.’ And they’re like, ‘What?'” The full story and audio at rollingstone.com has since been removed.

May 30, 2006 – Simon Cowell wasn’t impressed with Prince’s dash into the Kodak theater for the ‘American Idol’ finale last Wednesday, where he performed without meeting the ‘Idol’ contestants or greet the audience. “It just tells you how selfish he is,” Cowell said, according to ContactMusic.com. “He comes on, not a word – ‘I’m not gonna sing with anybody else, I’m not gonna say goodbye.’ Thank you for your generosity, Prince.”

May 30, 2006 – ‘American Idol’ season five finalist Kellie Pickler spoke to Chaunce Hayden of Steppin’ Out magazine about her father who was recently released from jail and the mother who walked out on her at the age of 2. “I just keep wondering if she watched the show,” Pickler said through tears. “I wonder if she knows. She must know. You can’t turn on the TV without seeing something about ‘American Idol’ or pick up a magazine. … So it’s made me wonder if she ever picked up the phone and voted for me. How weird would that be? I don’t know if I’ve even bumped into her at the grocery store. I just don’t know if I’ll be able to accept her back into my life, because we were never close in the first place. She just walked out on me. I wouldn’t even know what I would say to her. She hurt me a lot. I didn’t even think about my mom until I picked up a copy of Star magazine and saw her in there. I just cried.”