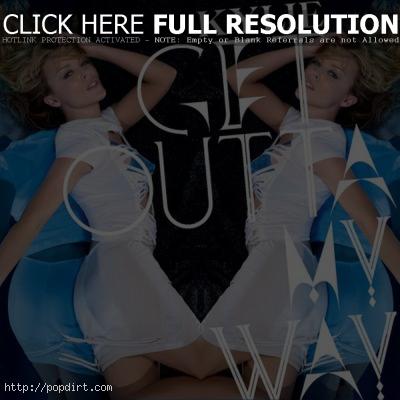 Kylie Minogue is out with the music video to her new single ‘Get Outta My Way’, off the Australian pop singer’s eleventh studio album ‘Aphrodite’, out now on Parlophone/EMI. Watch the AlexandLiane directed video via YouTube below.

Kylie Performs For Parlophone And Friends

August 22, 2010 – Kylie Minogue performed at Ring O’ Bells pub in Somerset, England for her record label Parlophone and friends. The Australian pop star’s show was a special thank you for her team getting her latest album ‘Aphrodite’ to number 1. Check out a clip of Kylie performing ‘Get Outta My Way’, the latest single off ‘Aphrodite’, via YouTube below.

July 22, 2010 – Kylie Minogue waved to fans as she arrived at the Channel 9 Studios in Melbourne, Australia on Wednesday (July 21). The 42-year-old performed ‘All The Lovers’ on the television show ‘Hey Hey It’s Saturday’ for her first live performance on Australian TV in 10 years. Watch it at YouTube. The show attracted 1.17 million viewers, a gain of over 200,000 viewers from its usual audience.