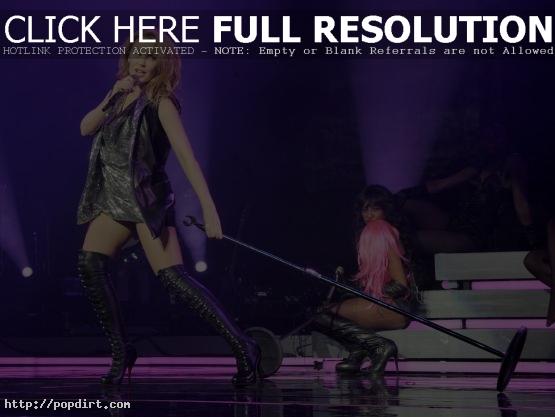 Last weekend, in a small town in the middle of Denmark, Kylie Minogue presented her biggest and show ever. Over 10,000 fans gave the Australian pop singer a standing ovation at the end of the two hour Aphrodite-Les Folies show at the Multi Arena. The concert, spread over seven acts, saw Kylie performing in eight bespoke Dolce & Gabbana creations.

Fans flew in from all over the world, from as far away as Hong Kong, from Russia, from the Middle East, from Adelaide in Australia they flocked to Denmark to be present at opening night. This was just the first night of an extensive world tour that will make stops from one end of Europe to the other, to Japan, Canada, USA, Mexico, New Zealand, Australia, South East Asia and beyond, not ending until well into 2011.

Check out an amazing montage of visuals and songs from her tour kickoff, as well as some teaser footage from Dolce & Gabbana of Kylie being fitted for some of her tour outfits via a pair of YouTube videos below the cut.