Kylie Minogue made a special trip out to Staten Island to spend some time with the PS22 Chorus kids, as she’s been a long time fan of PS22, even tweeting about the kids on more than one occasion. The Australian pop singer performed her hit single ‘Can’t Get You Out Of My Head’ as well as ‘Put Your Hands Up’, from her recent album ‘Aphrodite’. Watch both performances via YouTube below. 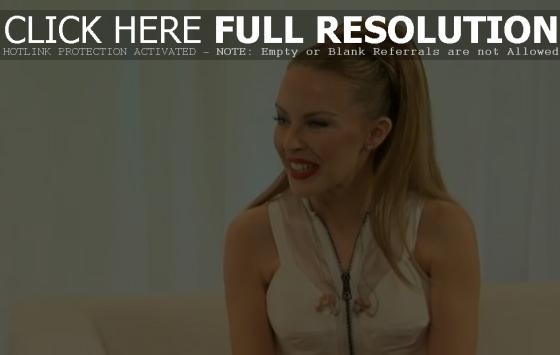 December 7, 2010 – Kylie Minogue spoke with Capital FM’s Roberto minutes after opening day two of the 2010 Jingle Bell Ball. The Australian pop singer talked about what fans can expect from her live set, being a fan of the venue, putting up her Christmas tree the prior day, and spending the holiday in Spain before tour rehearsals start January 3rd. Kylie then answered some questions submitted by fans. Watch the interview via YouTube below.

November 1, 2010 – Nelson Aspen of ‘Sunrise’ in Australia chatted with Kylie Minogue at the amfAR AIDS fundraiser at the Chateau Marmont in Los Angeles, which the pop singer was hosting. She talked about her duties for the evening, who made her dress, doing an independent film cameo in ‘Jack & Diane’, and when fans can expect her to tour in support of her new album ‘Aphrodite’. Watch the segment via YouTube below.