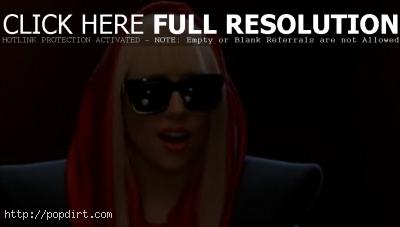 Yahoo! Music’s ‘Who’s Next’ features Lady Gaga in an interview and performance of ‘Just Dance’. The pop singer talked how initially she was unsure about becoming a recording artist or performing on Broadway, how she came up with ‘Lady Gaga’, how The Beatles influenced her before she discovered Queen, and how she readily admits to being “very weird.”

Gaga explained, “It’s okay. I love myself. I think that what I do is important. ‘Why is she holding that stick up to her eye?’ I mean, I have a reason for all of these things. But I don’t need to explain myself. I’m an artist.”

“I had been performing for years in New York, playing piano, writing music since I was thirteen,” Gaga said about her musical origins. “For a while, I didn’t know if I wanted to be a recording artist or if I wanted to be on Broadway. I would go into auditions and they would say you’re too pop for theater. Then I’d be in a nightclub doing my show, and somebody from Columbia Records would be sitting in the audience and they would say it’s very theater. I’m like, I can’t win.”

On her breakthrough television appearance, “I got booked on these huge shows. ‘So You Think You Can Dance’, the clothing, the dance, the performance art, it’s like I’m so proud of that. Ten million people are watching not because of the record, because of me. It was a huge opportunity that I am so grateful for.”

The interview and performance video at Yahoo has since been removed.