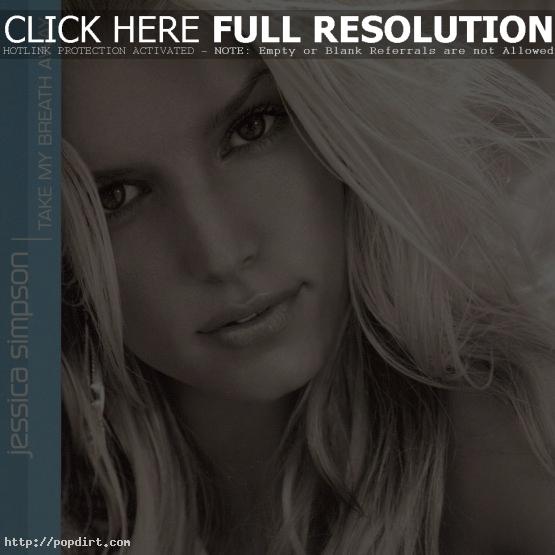 Jessica Simpson’s ‘Take My Breath Away’ makes its first appearance this week on the Hot 100 at No. 59 according to Billboard. The track is from the expanded edition of ‘In This Skin’. Her previous single ‘With You’ is still going strong at radio and only slips one notch to No. 16 in it’s 15th week on the chart. Janet Jackson enters the Hot 100 at No. 74 with ‘I Want You’. Janet’s last single ‘Just a Little While’ debuted much higher but couldn’t make gains on that and fizzled out No. 45.

March 27, 2004 – Globe magazine reports Jessica Simpson is saying her sex life with hubby Nick Lachey of 98 Degrees is fantastic, but acknowledges there may be a time when they need to spice things up. “If Halle Berry every wanted to hook up with Nick, I’d let him,” Simpson revealed. As for who she’d like a romp with, Simpson responded, “George Clooney. The really older man.”

Jessica Simpson Wises Up In Fashion And Beauty

March 26, 2004 – Jessica Simpson spoke with Us Weekly about her style makeover, which saw her go from a frightening outfit in 2001 at a Z-100 concert to fashion styles that are now being copied by other celebs, naming her makeover the third best ever, behind Jennifer Aniston and Jennifer Lopez. Simpson admits, “My style has gotten softer.” As for her biggest fashion rule? “Everything has to be fitted at the waist, otherwise it looks maternity!” Simpson’s stylist Kev Paves adds, “She’s always up for new stuff and all different things.”

March 26, 2004 – When ‘Saturday Night Live’ cast member Tina Fey dropped by ShoWest with Lindsay Lohan to talk about their new comedy, ‘Mean Girls’, Fey revealed to ‘Extra’ what she’s planning when Janet Jackson hosts ‘SNL’ next month: “I want to do a ‘Good Times’ parody with Janet and make her play Penny on ‘Good Times’ again.”

March 26, 2004 – Jermaine announced on Ryan Seacrest’s syndicated Los Angeles radio show that he intends to make Janet his wife. “I want to marry her. I’m not going to mess this up. I would like to be with her forever,” said the hip hop mogul. “We all could tell from the look in his eyes he wasn’t playing. It was obvious this is a guy in love,” producer Martin Wagmaister, who witnessed the declaration, told The New York Daily News.

Will Janet And Justin Reunite At ‘Damita Jo’ Release Party?

March 22, 2004 – The New York Post reports Virgin Records may have gone too far after inviting *NSYNC star Justin Timberlake to Janet Jackson’s ‘Damita Jo’ release party Monday at Spice Market. “Virgin wants him there, but Janet has not forgiven him” after the Super Bowl breast flashing stunt, an insider said, adding: “Justin knew exactly what was going to happen and then he just ditched Janet when it all blew up – and even blamed her.”