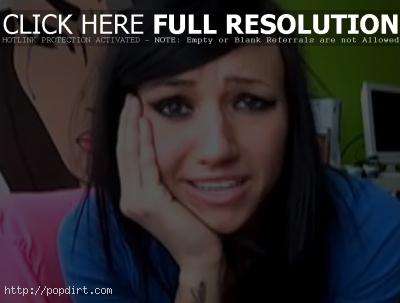 Lights’ latest video blog features the singer hosting a competition to find her pet spider Lance a new BFF, interviewing the three finalists. The Canadian singer questioned Cokey Coco-Nut, Trixxie and Archilon Shadowheart to find who would be best suited for her pet.

“As you may or may not know, over the past few weeks, I’ve spent some time putting together a sweet gift bag for Lance’s birthday, which was on January 15th,” Lights explained. “Aside from the original stuff I had in there, which included fruit and some money, Canadian dollars, I decided to throw in a couple more things to sweeten the deal before I gave him the bag, including this spare coat button and a $10 Tim Horton’s gift certificate, which in my opinion is like the best gift ever. So I go home, give it to him, and get this, he reaches out and smacks me across the face. I don’t know if you’ve ever been smacked by a spider, but it sucks. It doesn’t so much hurt your face as it hurts your soul. I was like, ‘Lance, what’s the deal, why don’t this gift and I worked really hard. I’m gonna get it together for you, slaved over a hot stage over the past few weeks, what don’t you like about it. He very sweetly told me, that when I’m gone, he loses control. I’m the only road he knows. I show him where to go. I was like ‘Lance, those are my lyrics’. He was a little bit embarrassed. He basically said he needs a friend because he gets a little lonely. It makes sense. I’m gone a lot, so I just need to know if he has a new friend, they’re gonna take care of him and be responsible but not be better than me.”