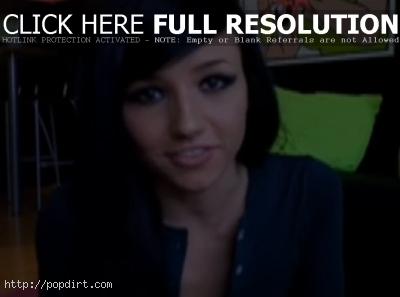 At home briefly between tours, Lights is giving fans a sneak peek at her new music video for ‘Ice’, which serves as a follow-up to her debut video ‘Drive My Soul’. The video comes out December 9th, the same day she’ll be performing on MuchMusic in Toronto. Since it’s the last video blog for the year, the Canadian singer wished fans a happy new year.

“I’m sitting here in my apartment in Toronto for like a day before I embark on sort of a mini tour of the area next week. I’ll be honest with you guys, it feels a little weird because alas, my lance is gone. It’s a little lonely and a little disheartening, but I feel very confident that when I get him back in a week, he’ll totally remember who I am.”

Lights added that she had some “sweet news” for her fans. “As you may or may not know, I put out my first music video for the song ‘Drive My Soul’ in September. Now, December 9th, my second music video is gonna come out and it’s gonna be the sequel, follow-up episode to the ‘Drive My Soul’ video. I’m not gonna tell you quite yet what song it’s for, but I’m gonna show you some clips of what went on behind the scenes and what it takes to shoot a Lights music video.”