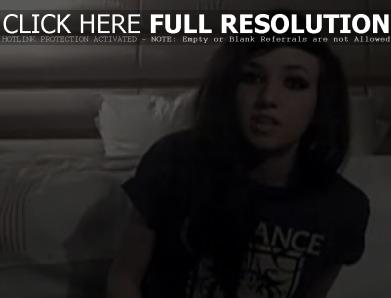 Lights checked in with a video blog from her hotel room, offering a quick recap on the major events of the past month. She talked about being on an empty flight for the first time, getting a Lord of the Rings sword from her parents, working with Spike Stent on a club remix for ‘Ice’, doing her first UK tour and leading her largest audience in a cover of the Backstreet Boys hit ‘I Want It That Way’ (showing video of the moment as well), and her sister’s marriage.

“So I’m here in LA, in my hotel room,” Lights explained. “Actually I had to get up at 3:30 this morning to catch my flight for 6 o’clock in Vancouver. It was the first time I’ve ever been on a really empty flight, so I had some time to site around and eat some beef jerky and stare down at my incredibly filthy shoes… I had some time to think about the last month. The month of April. It’s been a crazy month. I turned 22 on April 11th and I received from my parents probably the best gift I ever gotten, and that was the gift of sword, a replica Lord of the Rings sword.”