Lily Allen: I Have Lesbian Wet Dreams Quite Alot

Lily Allen is featured on the cover of the February issue of Gay Times magazine, on sale Thursday, where the pop singer covered everything from lesbian snogging to cognitive therapy, yoyo dieting and what she thinks of Perez Hilton. “I did once snog these identical twins in San Diego,” the 23-year-old revealed. “I was on the sofa and I had both them both, I was dancing and shoving my arse on one of them and one on my front bottom. That’s the only time, but I do have wet dreams – lesbian dreams – quite alot.”

As for her online blogger nemesis Mario Lavandeira, Allen said, “When he’s happy he’s good and when he’s sad about himself he’s really horrible – about everyone. He’s a woman hater but I think that’s something to do with his own self loathing. I find him quite annoying…as a gay man you should be championing young girls that are going out there and doing their own thing and not slamming them for owning their sexuality and calling them sl*ts. So much of what he does is bullying.” 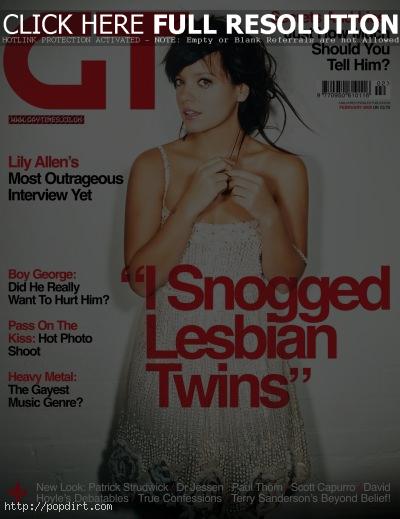 One thought on “Lily Allen: I Have Lesbian Wet Dreams Quite Alot”