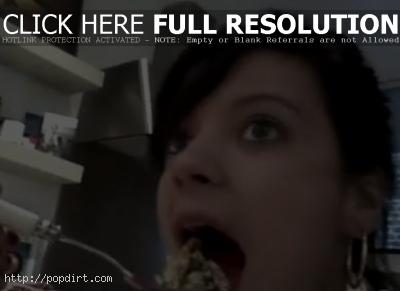 Lily Allen visited Lucio at 95.8 Capital FM in London on December 1st, where the British pop singer was promoting her new single ‘The Fear’, the first release from her second album ‘It’s Not Me, It’s You’. Lily said the first album was “this is what I think and it’s fact”, while the new disc is “oh, maybe I’m a bit wrong.” She added that when she’s songwriting, she’s writing for herself, but also wants something that resonates with other people, and because her life has become surreal, she’s been forced to some degree to talk bigger subjects like politics and relationships, since her life has become more unrelatable.

Asked about Britney Spears on ‘The X Factor’, Allen responded with a backhanded compliment. “I thought it was brilliant,” she said. “I really did. I think she is brilliant. Yes she mimed, but she’s always mimed. What did you expect? As a singer, I couldn’t dance and sing at the same time, I couldn’t walk and talk at the same time, never mind sing and dance. Yeah, I thought it was great. Yeah it was a bit tragic, but that’s what Britney is, isn’t it? That’s what I like about it, it’s a sort of tragedy. That’s what’s beautiful about it.” Allen added that when she went to Heaven later that night, she got thrown out of the Island bar where Britney was, so she never saw her at the G-A-Y appearance.

But when asked about Katy Perry, the claws came out. “I think she’s got a great production team,” Allen said with a bit of sarcasm. “I happen to know for a fact that she was an American version of me. She was signed by my label in America as, ‘We need to find something controversial and kooky like Lily Allen.’ And then they found her.” Allen said she took Capitol’s move as a compliment, but added that she thought the ‘I Kissed A Girl’ singer’s “lyrics and stuff are a bit crass. I think it’s good for what it is, but don’t read too much into it because, pop music, who cares!?”

The apparent source of Lily’s cattiness towards her rival was a comment she heard about Katy making. “She did say something about me, which I got a bit annoyed about and when I met her I was bit frosty with her because someone asked her to describe herself,” Allen explained. “She’s like, [in Perry’s squeaky voice] ‘Aha, I’m like a fatter version of Amy Winehouse and a skinner version of Lily Allen!’ It’s like, you’re not English and you don’t write your own songs, shut up!” The actual Perry quote mentioned in several articles about the singer was, “I don’t care who I’m compared to as long as people listen to the music. Usually, I find it funny to say I’m like a skinnier version of Lily Allen and a fatter version of Amy Winehouse. It always renders a good chuckle.”

Listen to the interview at musicradio.com.