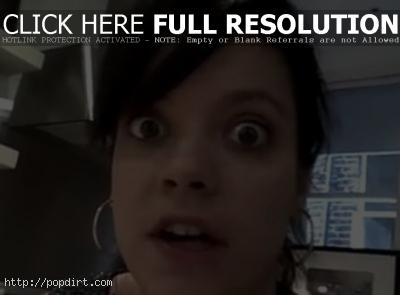 Lily Allen just posted a video clip she recorded using a Flip Video camcorder (dated January 1, 2007 but probably made Thursday without setting the camera’s date) on her YouTube “flipvideoslily” channel.

After talking about the camera, Lily showed off what she was eating and her pet dogs. Allen then talked about what she had coming up, including yoga, going to bed, a visit to the dentist the next morning followed by “a colonic irrigation, which I’ve never had before, and I’m quite scared.”

“I’ve got this thing, Flip video,” Lily said, “after hearing a review of it on I think it was Jo Whiley on Radio 1 the other day. I thought I’d invest in one. About 100 quid. Apparently you can upload these things straight on to YouHube, uh YouHube? YouTube or MySpace, and it’s all very easy. Wish I could show you the Flip because it’s a very simple device, but I can’t obviously because I’m filming this on it. I think everyone should go out and get one.”