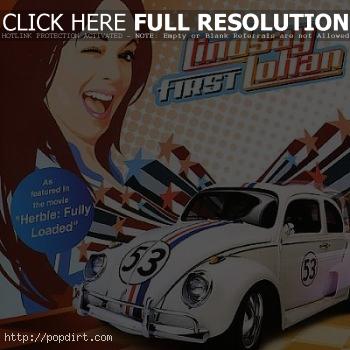 USA Today reports that after a screening of ‘Herbie: Fully Loaded’, Lindsay Lohan stomped out into the lobby of the El Capitan Theatre huffing, “I’m so (angry)!”

Her team of handlers hurried her into a bathroom for 12-minutes to cool down. After emerging, Lohan said, “I was upset when I didn’t hear my song (‘First’) during the race scene, where I originally thought it would be. I was like, ‘Whoaaa,’ because nobody stays to hear the song in the closing credits. So I ran out.”

Fox News Channel caught up with Lindsay Lohan for a ‘Herbie: Full Loaded’ press junket. The teen queen talked about being driven over 200 miles per hour, which she said was a “huge adrenalin rush”. FoxNews.com has since removed the video.

Lindsay Lohan spoke with the Boston Herald about life being plastered in the tabloids, which force the teen queen to defend her behavior to her young sister Aliana. “I see what she’s reading, and the people that don’t know me as a person are gonna believe what they read, which is, you know, it’s hurtful,” she said. “I have my sister seeing, ‘Why is Lindsay so thin?’ ‘Is it for the wrong reasons?’ And da, da, da, da, da. And then she calls me and she’s, like, concerned, because my sister’s 11 years old. So, I think it’ll fade away and die down eventually. But right now? I’m just letting it all kind of go.”