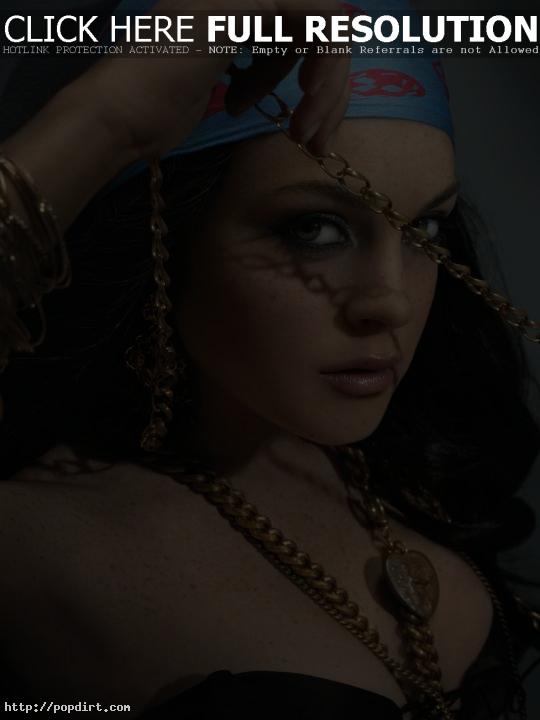 Lindsay Lohan thrilled an audience of military men on ‘The Tonight Show with Jay Leno’ on Thursday, where she was promoting her new album ‘A Litte More Personal (Raw)’ and the DVD release of ‘Herbie: Fully Loaded’. Lohan later stuck her foot in her mouth by discussing her character in the new film ‘Bobby’, where she plays a woman two marries four different men for the purpose of getting them out of having to go to Vietnam. Lohan twice defended the character, telling the military audience it was “for a good cause” that she enabled draft dodgers, prompting a few catcalls from the crowd. Read on for a rough transcript.

Jay: My first guest is one of the most popular young actresses around.
She’s a favorite of ours. Her movie “herbie: Fully loaded” is out on dvd,
and she’s got a new cd right here. It’s called “a little more personal.”
It’s cled “raw.” It comes out december 6th. Please welcome the lovely lindsay
lohan.

[ Cheers and applause ] Well, thanks for coming.

Lindsay: Wow. Thank you for having me.

Jay: When it was thanksgiving, and we told her that, you know, you guys
were going to be the audience tonight, she said, “oh, I’ll come. No matter
what, I’ll come.” So thank you for coming. Now, do you have a favorite
branch? Is it the navy?

Lindsay: I love you all!

Lindsay: I mean, let’s hear it for the coast guard.

Jay: You got the army?

Lindsay: Air force. What about the air force?

Jay: You got the marines. How about — and the air force.

Jay: That sounds like — you have a thing for the air force?

Lindsay: No, don’t get me wrong. I love you all so much.

Jay: Now you have a new look. Now, you were blonde the last time.

Lindsay: It’s dark for a movie that I’m doing.

Lindsay: It’s about the assassination of bobby kennedy.

Lindsay: No. My character is pretty — actually, she — my character’s
name is diane, and she’s still alive. And she married men so that they
didn’t have to go off to vietnam. And she was an activist in her own way.

Jay: The crowd is gonna jump all over that, yeah.

Lindsay: She only married four men.

Lindsay: Yeah. And then she felt like people would catch onto her. But
it was for a good cause. You know.

Jay: The crowd is getting edgy. I’m going to move on, on that one.

Jay: Now, do people treat is it weird? Do you notice any —

Lindsay: I don’t know. I feel like — I feel a bit classier with the
darker hair than I did with the blonde.

Lindsay: I think I always tried to feel smart anyway.

Lindsay: I will be back to my red hair, soon.

Jay: Yeah, no, I like it. It’s pretty. Now, your whole family is here.

Lindsay: I have a huge posse.

Jay: Your dressing room is, like, stuffed with every relative.

Lindsay: I have three siblings?

Jay: They’re all here visiting you?

Jay: Okay, so at are they doing? What kind of stuff are they they come
from back east, from new york?

Lindsay: Power of new york. In L.A.? They like it?

Lindsay: They’re visiting me. It was like pulling teeth to get them
out here, I swear. But they’re here with me, and it’s really nice to have
them thanksgiving so I don’t have to be by myself.

Jay: Aw. See, that’s the opposite. I can’t get them to go home. How
do you — you have to drag them out here? They don’t want to fly out here.

Lindsay: I do cook.

Jay: Really? So what’s your specialty? What do you cook?

[ Cheers and applause ] I should have brought some. No, I do — I do
good pancakes, too.

[ Laughter ] He just came back, yeah.

Lindsay: I feel like I’m at some, like, party with all you guys here.
This is awesome.

Jay: Now, I gotta ask you. Now, your brother is here, right?

Lindsay: I have two brothers.

Jay: 18, so you’re practically the same age. Do you guys hang out and
do stuff? Do you, like, go shopping? Or is he, like, icky, your brother,
keep him away?

Lindsay: He actually — we went shping the other day, got him some stuff,
some nice blazers. Boys don’t really like to shop.

Jay: Well, let me ask you. Now, does he go out with, like, friends of
yours? Sitting in the back, and I do have to see him right after this.

Jay: Well, I mean, like, does he ever want to go out or do you encourage
it or what?

Lindsay: No, I encourage it. But he’s been out with me a few nights
that we’ve been in L.A.

Lindsay: And his friend got a girl’s

Lindsay: And then my brother said he wanted to go. He’s like, “okay,
we’re going to leave the table now. We’re going to go look for some . So
I got — and I’m his big sister. Of course I’m not going to be, like “oh,
yeah, wer to you, go find some hot chick, take her home.” No, not okay.
Not okay.

Lindsay: I know how girls can be.

Lindsay: I’m not saying I am.

Jay: Not you, of course. Well, have you ever been manipulative with
a guy?

[ Laughter ] Give me — give me an example of what manipulation woulde?

Lindsay: I’m really calling myself out now. You know, if you’re with
a y and you know other guy friends, you say,well, call me in an hour,”
and then you’re with the other guy and this other guy’s calling.

Lindsay: But that’s not a good thing. I mean it’s nice to have —

Jay: Does it work?

Jay: Ooh, more tips right after this. Be right back with lindsay, right
after this.

Lindsay: If you have bad service in a restaurant, would you know what
to do? Should you suffer in silence or complain? “Inside edition” takes
a hidden camera inside a restaurant to show you the right way to complain.

Jay: Talking with lindsay lohan. You know, I was thinking about this.
Remember the first time you were here?

Lindsay: The — oh, geez. Are you going to show a a picture?

Jay: I’ve got better than a a picture. It’s hilarious. It’s amazing
how little you were.

[ Cheers ] You’re only, what, four years away from driving?

Lindsay: I’m excited. I drive on the lawn sometimes.

Jay: You drive on the lawn?

Lindsay: Yeah, I mean, it’s not like I’m a bad driver. I mean I was
driving —

[ Laughter ] It’s not about being a good driver or a bad driver. You
should be no driver.

Lindsay: I was driving our tractor once.

Jay: Oh, you have a tractor?

Lindsay: Yeah, I drove into a tree. Cf1 o

Jay: Probably the only tree in the yard, isn’t it?

Jay: Well, there you go. Some things never change.

Lindsay: I still am.&

Jay: Yeah, exactly. Innocent. I was looking at this cd here.

[ Laughter ] So explain the red — the red marking.

Lindsay: So the cd is titled “a little more personal, raw.” It comes
out december 6th.

Jay: Now, we had a debate over someone. We — is that a tattoo down
there?

Jay: That is a tattoo. What does that say?

Lindsay: It says “la bella vita,” which means “a beautiful life.” It’s
for my grandfather, who passed away.

Jay: Is that one of the songs in here?

Lindsay: It was the last song that we wrote for the record.

Lindsay: I wrote most of the record, except for probably two — well,
I mean, I covered two songs.

Lindsay: I did “edge of seventeen,” stevie nicks, cheap trick.

Jay: And I like your notes in the back. You talk abt your grandmother
and everybody and thank everybody. That’s very nice. I mean, I thought
it was really sweet.

Lindsay: Well, I better. Without them, I wouldn’t be here.

Jay: Well, that’s what I mean. Well, a lot of people kind of forget
that.

Lindsay: No, my family means the world to me. Just playing “8 mile,”
we have the beat and raymond was & battling.

Lindsay: From the marines.

Jay: Did you have to get grandma’s approval for this tattoo? Does she
know about this?

Lindsay: Yes, I was on the phone with & my grandmother when I got
it.

Lindsay: Because she’s italian. I wasn’t sure. People were telling me
all different ways to say it.& And I said I don’t have wrong cf1 o
meaning on my back tattooed for life. But she, yeah, she knew. My mother
didn’t know. My grandmother did.

Jay: Is that the only tattoo?

Lindsay: No, I have a star right here.

Lindsay: And I just want to get breathe for john lennon.

Jay: Right, okay. Very cool. Now, did it hurt getting a a tattoo?

Lindsay: This one kind of freaked me out a bit more.

Jay: Yeah, right on the vein is not a good idea.

Lindsay: This thing hurt. I was eating ice cream when I got this one.
I was just scked that it didn’t hurt.

Jay: So they give you ice cream?

Lindsay: I was distracting myself.

Jay: Were you 9 when you got this one?

Lindsay: No, it was actually in new orleans when I was filming my last
movie that comes out in march.&

Lindsay: Whoo? Is that the same jared?

Lindsay: I don’t know. You mean jordan catalano? No.

Jay: See, they said you were engaged. Finger.

Jay: Oh, it’s the other finger.

[ Cheers and applause ] So there’s nothing to that? Now these — these
guys would like to know what kind of guys do you find attractive?

Lindsay: There are men that are fighting for our country. Men that —
what was that?

Lindsay: But, I mean, if I fell in love with one of you guys right now,
then —

Jay: You know. I don’t believe these men could fall in love in an hour.
It would take longer.

Lindsay: I think there is such a a thing as love at first sight.

Jay: You think — do believe in love at first sight?

Lindsay: I mean, I can’t see everyone back there. I think I need to
come up —

Jay: Do you believe in love . At first sight?

Lindsay: I haven’t had that experience.

Jay: You haven’t had that experience?

Lindsay: Yet, but I have some time.

Jay: You’ve got plenty of time.

Jay: You’ve got plenty of time. All right, well, listen, congratulations
on “raw,” is the new cd. And “herbie: Fully loaded” is out on dvd.

[ Chee and applause ] Thank you for coming