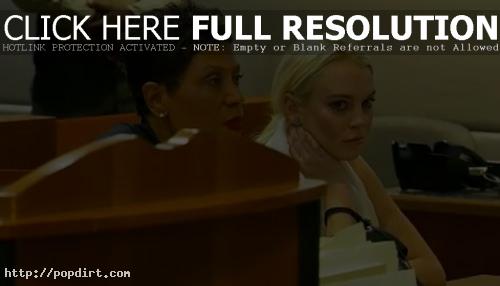 Superior Court Judge Stephanie Sautner revoked Lindsay Lohan’s probation at a hearing earlier today. The actress and singer was taken into custody on $100,000 bail after Sautner ruled that she was in violation of her probation by booted from a community service assignment. Lohan had been slow to serve any of the 360 hour probation she was ordered to serve at the Downtown Women’s Center shelter, calling the experience at the center “not fulfilling” in a probation progress report.

“Her probation would have been over last year, had she done what was expected of her,” Sautner said. The judge added that should Lohan make bail and want to “mitigate” her potential punishment before a hearing on November 2nd, she would be advised to work no less than two eight-hour shifts a week at the morgue toward the 120 morgue hours that were also part of her probation requirements.

Watch footage from the Associated Press below.

June 28, 2011 – Lindsay Lohan has attracted more controversy while serving a house arrest sentence. The singer and actress had parties at her home during house arrest, but a judge rules she was only guilty of poor judgment. TV Guide’s “Hollywood 411” talks to Lindsay’s father Michael Lohan about his daughter’s most recent headlines.

“I’m not saying she should be in jail, but I’m saying the court should have said you can’t drink or use drugs,” Michael said about his daughter’s house arrest rules. “The only way she’s gonna get her life right, is if she stays away from all alcohol and all drugs.” Michael added that “our relationship is fine, but as you can see I’m still her dad, I’m not going to be her friend about this. I just want things to get back on track for Lindsay, for her life, but also for my family. There can’t be any dissension in the ranks between Dina and I. We both have to be on the same page. If it wasn’t for our falling out, none of this would have happened with Lindsay to begin with.”