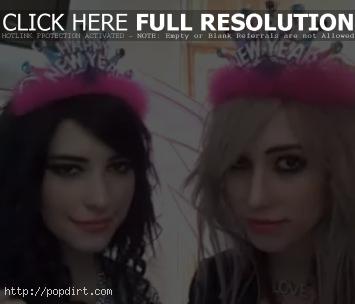 Lisa and Jess Origliasso documented their New Year’s Eve celebration when they stopped by MTV in Times Square, hosting the New York City leg of the Miley Cyrus New Year’s Eve show. The pair were sporting wings and tiaras, making use of their party blowers.

“We’re here at MTV Studios, Times Square, about to film our first hosting gig with MTV, with Miley Cyrus, she’s in California. We are representing the NYC leg of the party night,” Jess explained. “We haven’t started filming yet, but we’re excited.”

Lisa added, “We hope you guys are having fun, whatever you’re doing. Probably not as much fun as we’re having. Did I mention how much I love MTV? MTV rocks my world. They got us a really good gig.”