Lisa Origliasso Of The Veronicas Only Eats One Eyed Monsters 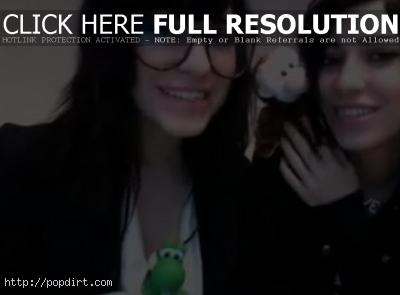 The Veronicas, joined by some stuffed creature friends, updated fans on their YouTube channel. The Brisbane pop twins were in Los Angeles and got their luggage back after their Fashion Week problems in New York, though Lisa was sporting her same glasses.

Jess Origliasso said that she no longer supports real robots since becoming a vegetarian, but she does support tofu robots. Lisa responded by saying she only eats Peedi Peedi one-eyed monsters (the stuffed toy she was holding), with Jess jumping on the unintentional phallic reference.

“We’re just here at the Warner Bros. office hanging out with our little friends that have just bombarded us since we’ve become famous,” Lisa said about their stuffed toys.

Jess said about their upcoming schedule, “We are about to go on tour with Hanson in a few days. We have a lot of other exciting things going on that we can’t talk about right now. We actually have an announcement. A lot of you may have heard I recently became a vegetarian, well not recently, but I’ve become vegetarian. So I no longer support real robots, but I do support tofu robots. We’re about to go on tour with Hanson, which is extremely exciting.”