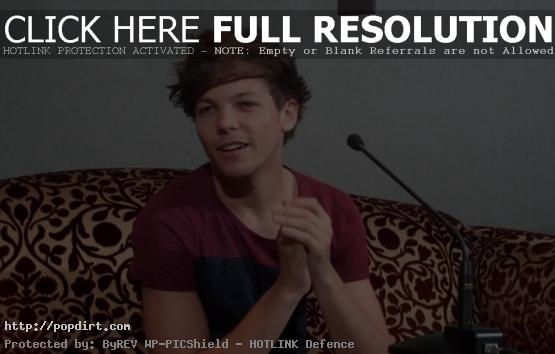 In New Zealand for a few days, One Direction’s Louis Tomlinson talked with Radio Live’s Hilary Barry and recalled his experiences of the last 18 months, looking forward to the next 18 months, the great job their security does and how he really does get along with his bandmates Niall Horan, Zayn Malik, Liam Payne and Harry Styles as much as it appears.

On being able to leave their hotels with screaming girls outside:

We’ve got an amazing security team actually who have been working closely at the moment and they’ve just made everything a lot easier for us and safer.

If he’s surprised by their adoring fans:

Yeah, we are surprised. I don’t think it’s something you can ever get used to really. It’s an amazing feeling to think that those people are there for us. At the end of the day, we’re just doing something that we love. To be appreciated for that, it’s really nice.

On getting along with his bandmates:

I think sometimes people think it’s a little too good to be true. People often question if we actually do get on as well as it seems and we actually genuinely do, which is crazy because we didn’t know each other 18 months ago. This would be such a different story if we were solo artists. I don’t know if I’d be able to hack it if I was a solo artist. It’s a lot of time away from home, but to have the other guys with you is really nice. It makes everything so much more fun.