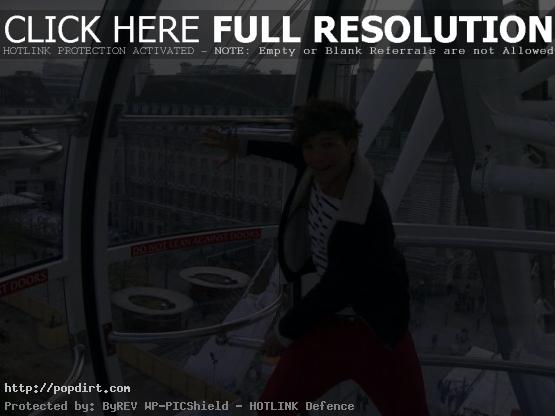 Taylor Kaye of KiSS 92.5 in Toronto got Louis Tomlinson from One Direction on the phone the other morning to promote their upcoming record ‘Take Me Home’. The pop star talked about what to expect from the new album, how it felt more comfortable recording their sophomore effort, getting Ed Sheeran to contribute to the project, wanting to work with Katy Perry in the future, wanting to go skydiving one day, having a fan base that attracts all ages, planning to have a treehouse built in his back garden and thinking he’s not suited for tattoos.

“The album is pretty similar to the first one,” Louis said in regards to ‘Take Me Home’. “It’s got a little bit of difference. It’s a bit more guitar driven and heavier on the drums. There’s kind of a track on there for everyone. We’ve got some uptempo, some ballads, emotional ballads, that kind of thing.”

Asked if it was a more mature effort than their debut, he said, “It definitely feels a bit more comfortable this time around. We feel obviously slightly more experienced than the first album.”

Discussing Ed Sheeran’s contributions on ‘Take Me Home’, Louis said, “Ed wrote on two tracks on the album, which both of them are great. I love both of them. So obviously that’s really exciting. Ed is such a great match for us, because obviously he is on fire at the moment. He’s doing really, really well, and also he’s a great lyricist, so it’s great to work with Ed.”

Asked what other artists he’d like to work with, Louis responded, “I’ve always loved Katy Perry. I think she’s a great lyricist. Obviously she’s got the really poppy records and the radio hits, which are great, but I like her more emotional stuff like ‘Thinking of You’, which is actually one of my favorite songs. I think she’s great.”

Talking about how they’ve attracted fans young and old, he said, “It’s really important for us to again not follow the complete stereotype of boy bands. It is nice to have a bit of variation on our fan bases. I think I can understand why it might click with moms. Obviously when these moms were younger, they had the boy band of their generation. It sort of reminds them of that time, so it’s cool.”

Asked what the first big thing he’s bought with his royalty money, Louis said, “I haven’t got it yet, but I am having the most amazing treehouse build in my back garden. It will be amazing. It’s gonna have a little bridge walking up to it. It’s gonna be wicked.”

Does he or will he get any tattoos? “I don’t have any tattoos. It’s something I contemplated for awhile, and I came to the conclusion I don’t really think it would suit me, so it’s a no-go for me.”

Listen to the interview at kiss925.com.