Lucy Walsh Always Wanted To Be The Center Of Attention 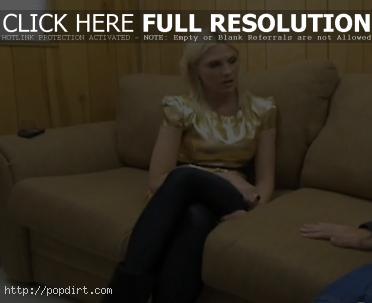 Lucy Walsh sat down for an interview at the Marin County Fair with Matt Fowler. The daughter of Eagles guitarist Joe Walsh said from the age of 3 “I wanted to do whatever was going to make me the center of attention” when asked when she knew she wanted to be a musician.

She also talked about growing up with a famous father, the experience being on ‘Rock the Cradle’, touring with her friend Ashlee Simpson, the inspiration for ‘Lullaby’, getting to hang out with Cyndi Lauper for a day, and what she’s learned from being a musician.

“Ashlee was a friend of mine and when ‘SNL’ happened, she called me really upset and asked me if I would be in the band,” Lucy explained. “It was fun to be in her band because the tour had a lot of money, so we had great buses. You’re just travelling with your friends, waking up in a different city everyday and playing gigs.”

On the inspiration for ‘Lullaby’, she said, “‘Lullaby’ I wrote about a boyfriend of mine named Andrew who passed away of cancer when he was 22 and that’s who I wrote that about. It’s a heavy thing. The message really is to do the things that are in your heart and tell the people you love that you love them because we all know that life changes in a second.”

«Cheryl Cole To Compete On ‘Dancing With The Stars’?
Nikki Flores Covers ‘Unthinkable’ By Alicia Keys»