Lynne Spears ‘Through The Storm’ Cover

The cover of Lynne Spears’ memoir ‘Through the Storm: A Real Story of Fame and Family in a Tabloid World’ has been posted online ahead of its release August 21st via Thomas Nelson. A product description on christianbook.com reads as follows: 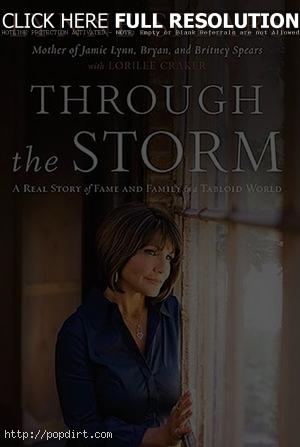 Lynne was just an ordinary Southern mom when the overnight success of her daughter Britney shoved the Spears family into the blinding limelight glare.

Through the Storm takes readers beyond the reach of the paparazzi and outside the narrow orbit of the Hollywood glitterati to share the inside story of the Spears family-as only a mother can tell it. In this openhearted memoir, Lynne speaks about Britney, Jamie Lynn, Bryan, ex-husband Jamie, herself, and their lives together from Louisiana to Los Angeles, including:

Her regret in abdicating parental authority to managers, agents, and record companies

The challenges that shaped Lynne and Jamie’s marriage and how that affected Bryan, Britney, and Jamie Lynn

Her response to Jamie Lynn’s pregnancy

How faith, family, and friendships have been her harbor in the storm of paparazzi, tabloid scribblers, and gossip hound s

Sincere, self-effacing, sometimes spunky, Lynne’s memoir reveals the heart of a mother who has struggled through difficult times and how she has held onto her faith and her sense of humor as she tries to hold onto her family.

2 thoughts on “Lynne Spears ‘Through The Storm’ Cover”