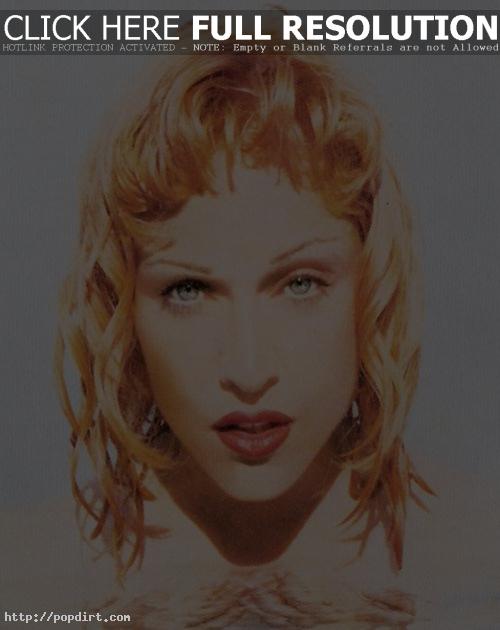 ContactMusic.com reports that Madonna believes No Doubt singer Gwen Stefani has copied her appearance and followed her lead by marrying a British man. “She ripped me off. We work with a lot of the same people,” the Material Girl sniffed. “She married a Brit, she’s got blonde hair and she likes fashion. But I don’t mind. I think she’s very sweet and talented.”

Madonna Under Fire With Rabbis

October 29, 2005 – David Spade joked on his ‘Showbiz Show’ report the other night, “Madonna has come under fire with rabbis who claim a song on her new album about a Kabbalah scholar is a cheap attempt to profit from his name. Because nothing says ‘cashing in’ more than a trendy song about a sixteenth century Jewish mystic.”

October 28, 2005 – PopJustice.co.uk caught up with Stuart Price for a Q&A and asked the producer of Madonna’s new album ‘Confessions On A Dance Floor’ if there was anything he could have done to her new single ‘Hung Up’ to make it sound any more gay. “A lot of people are saying this,” Price admitted. “I don’t know, it doesn’t strike me as being that gay. Is it the Abba sample that makes it like that? It’s got a bit of a strut hasn’t it? When you put that record on your hips just start doing… Well, I I was going to say unnatural movements, but unfortunately they’re very natural movements, aren’t they? I’m not sure how we could have sprinkled any more glitter on that track, though.”

October 28, 2005 – Popjustice.co.uk reviewed Madonna’s new album ‘Confessions On A Dance Floor’ ahead of its release on November 15th. They called it “the best dance music that sounds like pop music album of 2005” and said it’s “probably Album Of The Year.”

11 thoughts on “Madonna Claims Gwen Stefani Is Copying Her”