Madonna and her daughter Lourdes spoke with ITN on the pink carpet at Macy’s in Manhattan for the launch of their new Material Girl fashion range.

“You know, school’s not a nightclub, that’s what I always say to her,” Madonna said after Lourdes complained about her mother’s dress code. As for whether their clothing line is too risque, Lourdes said, “I don’t think the clothes are inappropriate in any way. I think the people who are saying that, I feel like that’s fashion now.”

Watch their comments, as well as remarks from the face of the campaign, Taylor Momsen, via Muzu below. 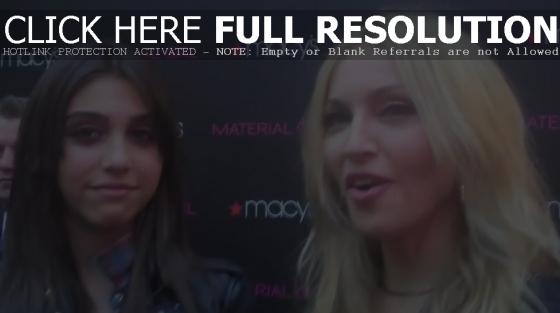 September 25, 2010 – Madonna and her daughter Lourdes walked the pink carpet at the launch of their Material Girl line at Macy’s. Popstar! Magazine was there, asking the pair what inspires them most about each other’s style, the first thing she ever bought at Macy’s, and how Lourdes did most of the work. Lourdes also stopped to pose for photos with Taylor Momsen, who is the face of the clothing line. Watch footage via YouTube below.

July 23, 2010 – Madonna was given threat of a £5,000 fine over a loud karaoke party at her London home, which was hosted by the Material Girl’s staff while she was away. “Madonna likes a good party like anyone else but she is respectful of her neighbors and doesn’t like to upset anyone,” a source close to the 51-year-old told The Mirror. “She was absolutely furious when she found out.” Watch a report from ITN below.