Madonna Phones Into TRL To Debut ‘Die Another Day’ 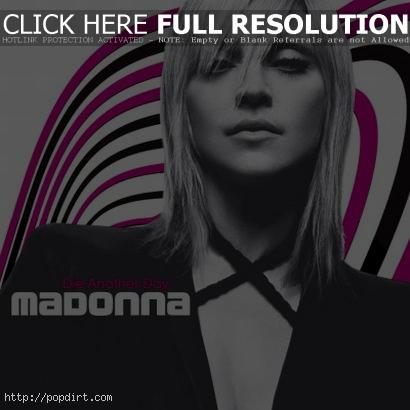 MTV premiered the new Madonna video ‘Die Another Day’ last night and on TRL earlier today. Madonna phoned in from Los Angeles to talk with Carson about the video, her husband Guy Ritchie, the upcoming birthday of her daughter Lourdes on Monday, and her new movie ‘Swept Away’, which opened to a limited release today. Fans can check out the video online at MTV.com, and for a transcript to their TRL chat, read on.

Carson: Set your VCR, kids. The most powerful woman in music on the phone say hi to Madonna everybody. Madonna.

Madonna: Carson how are you.

Carson: Very well and you.

Madonna: Very well but I’m experiencing a bit of sunshine over here.

Carson: It is raining as I mentioned where are you.

Carson: I watched you on Larry King live last night you looked like a million bucks.

Carson: Yeah I did you if did not watch it it was like –.

Madonna: I actually did not watch it but, gosh, Is that a compliment I looked like the first lady?

Mandy: Oh, okay thank you then.

Carson: That’s what ye done so well that’s the bring this new individual we are about to premiere here “Die Another Day” you somehow make being tortured look sexy.

Madonna: Yeah, well, sometimes, as you know, Carson, it can be.

Carson: I know “Swept Away” is out today. Congratulations on that.

Madonna: Thank you very much

[Cheering] You better go to see it.

Carson: I will. Lookin’ forward to it.

Madonna: You want me to get a bowl of pasta dumped on my head.

Carson: I dream about it constantly I had dinner with your husband in Las Vegas and met him for the first time Guy Ritchie what a guy he is.

Madonna: Yea, I think I made the right choice.

Madonna: Yeah, she will be

Carson: Any plans, going to Chuckie Cheese or something?

Madonna: We are going to London this weekend so she’ll have to settle for Big Ben.

Carson: No Chuckie Cheese I watched video its grit you’ve done over videos when you go into process you in what is going on in your find are youg to stay so far ahead of the curve?

Madonna: No I don’t make a conscious attempt to do that. I just try to — I try to, uhm present the song an original way and unique and original provocative way that’s my goal

Carson: You should have put yourself in it more.

Carson: Let’s go ahead and roll down the video for everybody they have no idea what we are talkin’ about you’ll see some bond moments.

Carson: Let’s watch it can you hang on Madonna.

Carson: Here is “die another day” the world premiere from Madonna on MTV enjoy it

Carson: Well she’s outdone herself once again that’s ma do not in’s MTV premiere on TRL “Die Another Day” joining us still on phone. Congratulations.

Madonna: Thank you very much.

Carson: You never cease to amaze us. I wish hi more time the boys from Bon Jovi surprised us we are grossly out of time.

Madonna: Nice talking to you have a great weekend.

Carson: You know who is no. 1 you seen the video “Dirrty”.

Madonna: I haven’t should I.

Madonna: All right I will thanks for the recommendation.

Carson: Have a great weekend.