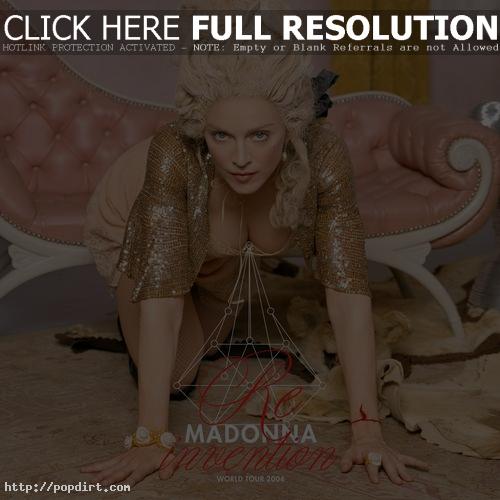 Contributed anonymously: Madonna will be releasing her long awaited Reinvention Tour DVD in September according to Warner Music in Japan. The DVD will be released there on September 15th and the rest of the world September 18th. The Material Mom who is currently on her Confessions Tour will air that concert for a special on NBC in November.

Madonna To Possibly Be Arrested On Sunday

August 18, 2006 – The Daily Mail reports Madonna may possibly be taken off stage and arrested during her upcoming concert on Sunday in Germany if they feel that she is “insulting religious beliefs”. If arrested, she could be fined up to 20,000 pounds and be given a suspended jail sentence for a first-time offense. Read more.

August 16, 2006 – BBC News reports German prosecutors are to monitor Madonna’s concert in Dusseldorf on Sunday to determine whether a mock crucifixion could be construed as insulting religious beliefs. Prosecutors admit they will rely on media reports of the concert rather than send their own observers. Read more.

August 15, 2006 – Neil Sean of Sky News reports Madonna is set to release two different DVD’s for her ‘Confessions’ tour, one with swearing and graphic images – and one without. “I wouldn’t want my children to watch that, but I know they like the music,” the Material Girl reasoned.

August 12, 2006 – The Mirror reports Madonna’s 9-year-old daughter Lourdes wasn’t happy about mom’s video for ‘Hung Up’. “Yuck, that’s disgusting. Why are you behaving like that,” she asked her mother. 47-year-old Madonna said, “She even asked me if I’m gay because she’d seen me kissing Britney Spears at the MTV Awards.”

The Pope Sees The Bright Side

August 12, 2006 – Carson Daly joked during his ‘Last Call’ monologue on Friday night, “The Catholic church is, of course, upset with Madonna. Madonna, now, is using a giant cross and a crown of thorns in her concert. His holiness, the Pope, responded by saying — ‘My children, we got of easy. At least she’s not acting anymore.'”

Will Madonna And Guy Renew Their Wedding Vows?

August 7, 2006 – A friend of Madonna and hubby Guy Ritchie tells The Mirror the couple, who had been denying break-up talk, are now planning to renew their wedding vows. After the Material Girl wraps up her Confessions tour, the pair reportedly want a simple ceremony at their Wiltshire estate. “They want to show the world how committed they are to each other,” the pal explained. “They have missed spending time in the English countryside with friends and family.”