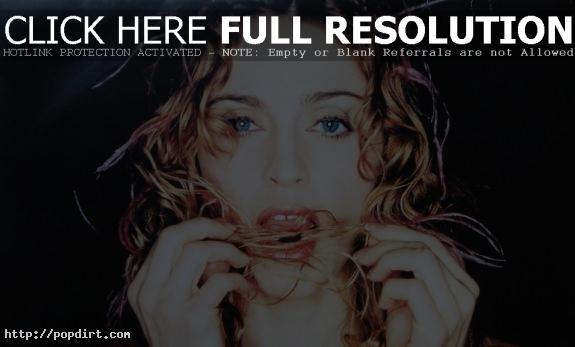 Madonna was on the phone with Johnjay and Rich of 104.7 KISS FM in Phoenix on Monday (December 22). The stations’ soundguy put together a lengthy highlight reel which Madonna enjoyed, prompting Madonna to recall some of the music videos she shot for the singles. Asked about her favorite songs, she said it’s more her new stuff. They then discussed Bikram yoga, which Johnjay has credited to his losing 100 pounds. The weight loss then led to Johnjay talking about colonics, and how he read Madonna has done it. She admitted 15 years ago she had a colonic, but that was it.

Madonna then talked about how unusual it is for her to cook, having recently cooked an omelette. Asked if she was a OCD, Madonna said she’s a neat freak. “My children’s bedrooms. I go ballistic if their clothes are on the floor,” she said. “If a picture is crooked I have to fix it. All clothes must be hung up. I hate messes.” Asked how she disciplines her kids, Madonna joked, “I throw them in a cage, with a small rodent in it.”

The interview audio and their thoughts about it afterwards at johnjayandrich.1047kissfm.com has since been removed.

Madonna’s Christmastime With Guy – And A-Rod On The Side

December 15, 2008 – The Sun has learned a condition of Madonna’s plans to celebrate Christmas in England with ex-husband Guy Ritchie and their children is that her rumored New York Yankee boyfriend Alex Rodriguez can tag along, though he won’t be going to the family dinner. Madge plans on flying the slugger first class into London, allowing him to stay at a top hotel. “She wants the kids to be with their parents but wants time with A-Rod too,” a source told the British tabloid. “She knows he lives large and that he loves the fact she’s his equal for earning power. She wants to treat him.” Read more.

December 14, 2008 – Metro reports Britney Spears is trying to line up Madonna to make a series of appearances on her upcoming ‘Circus’ tour. “There’s been talk of Madonna making an appearance, and there’s so many places we could take that,” Spears’ choreographer Wade Robson explained. “At this point, the main issue is timing.” Read more.

Madonna And Guy Ritchie To Spend Christmas Together For The Kids

December 14, 2008 – The Mail on Sunday reports Madonna and Guy Ritchie will be enjoying Christmas together with their children at Guy’s Ashcombe House estate. “Madonna and Guy want the best for the kids and so she has decided to come over to the UK so they can be with their father,” a source told the British tabloid. “He is planning on having a traditional turkey dinner – although all the food will be organic at Madonna’s insistence. Madonna doesn’t really like Ashcombe but she thinks it’s important that they put on a united front for the kids. She will, however, be eating a different meal as she will only eat fish. She will also be working out on Christmas Day.” Read more.

December 1, 2008 – The Mirror hears that Madonna has been erasing all memory of ex-hubby Guy Ritchie from her London home, taking down pictures and erasing their telephone message. “She’s removed all photographs of the pair of them, leaving only the ones featuring Guy with the children,” a source tells the British tabloid. “The joint answering machine message has been replaced with a neutral one.” Read more.

A-Rod Has Dinner With Family Before Meeting Up With Madonna

November 29, 2008 – People magazine reports Yankees slugger Alex Rodriguez celebrated Thanksgiving with his family in Miami before heading off to spend time with Madonna, despite earlier reports suggesting he would skip dinner with ex-wife Cynthia and daughters Natasha, 4, and Ella, 7 months. “He always had every intention of spending the holiday with Cynthia, the family, and his two daughters,” a source explained. “There was never any intention of him flying back. The allegations regarding this trip to New York [to be with Madonna] couldn’t be anything farther from the truth.” Read more.

November 25, 2008 – Access Hollywood reports New York Yankee star Alex Rodriguez plans on spending Thanksgiving with Madonna, and the slugger’s ex Cynthia Rodriguez is sounding off in a furious email to a close friend. “My 6-foot-3, 220-pound soul-less, soon-to-be ex-husband is abandoning his kids on Thanksgiving to be with Madonna,” Cynthia complained. “She called and he ran on her command back to New York City… Gross!” Cynthia wrote. Read more.

November 23, 2008 – Madonna and Guy Ritchie’s celebrity marriage began in a Scottish castle but ended 8 years later in a drab London courtroom, without either party showing up. “She always kept on with her own career, she always kept trying to be more successful with a more sort of presence of you like,” Neil Sean commented, “and I think for Guy Ritchie, he thought, ‘You know, I’m not happy being second fiddle’.” Watch a report from CBS News correspondent Charlie D’Agata below the cut.

«Demi Lovato Covers ‘Mercy On Me’ By Christina Aguilera
VV Brown Missing The Studio, Reads Up On Japanoise»