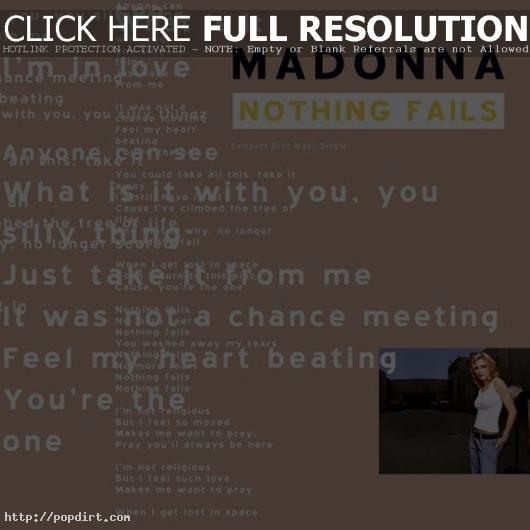 All in all, Madonna has 12 certified Billboard #1 singles. Unfortunately, the number of her singles that flopped is more than 12. She has 13 certified flop singles that tanked in the Billboard charts. The dates refer to the single’s release date and the numbers in brackets refer to the single’s peak position. If there’s no number inside the brackets, it means that that single is more than a certified flop – it didn’t chart at all! So let’s take a trip down memory lane…

1. Oh Father (11/11/89) [20] – No one could believe it in ‘89 when a Madonna song suddenly failed to reach the Top 10. At that time, some fans were prepared to drink the shampoo mixed with arsenic he bought from the local apothecary when they heard the news. They changed his mind though when “Oh Father’s” follow-up “Keep It Together” peaked at #8.

2. Bad Girl (2/20/93) [36] – Its semi-autobiographical video, which I believe truly reflects the state of Madonna’s life back then is spooky, eerie and really sad. This, by the way, was released in the midst of the “Sex/Erotica” backlash.

3. Bedtime Story (4/22/95) [42] – Released in the wake of her biggest hit ever, “Take A Bow.” Just when you thought she was getting over the “Sex/Erotica” backlash, things started to go bad again. The horrible song co-written by the horrible, weird and overrated Bjork had an eerie video. There were far better songs in “Bedtime Stories” which deserved to be released as singles, but no, Madonna had to prove a point. Was it worth it? No. Not only the single flopped – the single after that flopped better.

4. Human Nature (6/29/95) [46] – The follow-up to the horrible song “Bedtime Story” and Madonna’s grand screw you to everyone for the “Sex/Erotica” backlash. This too flopped.

5. Love Don’t Live Here Anymore (4/20/96) [78] – I was really surprised when Madonna decided to remix this old song from the “Like A Virgin” CD and included it in “Something To Remember” and release it as a single with a video. The song sucked and the video was boring.

7. American Pie (2/19/00) [29] – Personally, I think the remake and the video were great – also the movie where it came from was great. I just don’t understand why people hated those.

11. Me Against The Music (Britney Spears Featuring Madonna) (10/25/03) [35] – How could Madonna have sunk so low? She could’ve at least chosen to do a duet with Floptina Aguilera, who has more musical integrity than this talentless trailer park girl!

With that, Madonna can rightfully be called The Queen of Flops. I REALLY wish that some fan of hers would do a similar list about Mariah Carey. If they do, I hope they base it on the Billboard Charts, which is official and legit, and not on some Third World-based tally. Trust me, if they ever do it, the list would not even qualify as short.

«Kaci Brown Offers Praise For Carrie Underwood & New Fans
Duff: I Am Not A Brand, I Am A Person»