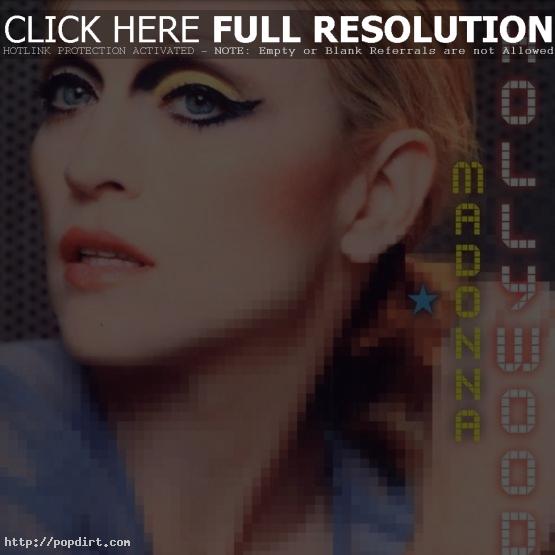 Madonna has released a remix of her new video, ‘Hollywood’. The remix shows outtakes from the shoot, so the video is completely different. The song is very well mixed, with technofied beats and catchy lyrics. Video at VH1.com has since been removed.

July 10, 2003 – Us Weekly reports Madonna and Jennifer Aniston frustrate the pesky paparazzi by going out in public wearing clothes they’ve often worn in public before, so new pictures taken of them will be worthless. Aniston’s standard outfit is green cargo pants and a white T-shirt; Madonna wears a newsboy cap and Adidas sweat suit.

Madge’s Kids Head Down To Bed-Rocco

July 1, 2003 – Madonna’s nanny took her two children Rocco and Lourdes to Universal Studios park in Los Angeles as she rode her bike to her Kabbalah philosophy lesson. Check out pictures of the two kids posing behind a poster of Fred and Wilma Flintstone at the park here.

June 29, 2003 – Steve Wynn tells the Las Vegas Review Journal that Madonna was contacted about a headliner deal at his new resort, but he hinted the Material Girl’s asking price was too high. Wynn contacted her two months ago, but says “there are no negotiations going on.” He explained, “At present, MGM and Mandalay Bay have jacked the prices of these acts up so much higher than anywhere in America that the expectation is unreasonable. The prices paid in Las Vegas have been off the charts relative to other cities for the same artists in America. Having said that, we’d always love to have great musical acts at our resort.” The story at reviewjournal.com has since been removed.

Vanilla Ice Has No More Bitterness Towards Madonna

June 28, 2003 – Chart magazine’s Nardwuar caught up with Vanilla Ice and asked him about dating Madonna and how she’s since said it was a mistake to pose with him in her Sex book. “She says it’s a mistake because I keep talking sh** about her,” he explained. “I told her that, that was the biggest regret I have out of most of the stuff I have done, was being in her book. We didn’t depart too happily. So I don’t know if there’s gonna be any kind words there but I still got love for her, there’s not anything going on today, all the bitterness or whatever is fine today. We’re happy today, but back in the day, we went different ways, y’know?”

June 27, 2003 – Us Weekly reports that Madonna has been approached about doing a “Celine Dion-type show” at Steve Wynn’s new resort. The source says “the offer is out, and Madonna is considering” the megadeal, which would involve rotating headliners, as Dion does at Caesars Palace. If the Material Girl does sign on, it “won’t be nearly as many weeks as Celine’s deal” of 40 weeks a year over three years.

Madonna Won’t Give Up Acting Career

June 24, 2003 – Jeannette Walls of MSNBC.com reports Madonna is not willing to give up on her acting career. The much criticized actress reportedly is in talks with Merchant Ivory, the filmmaking team behind high-brow period dramas such as ‘Room With a View.’

June 23, 2003 – While glorifying the glitz and glamor of Hollywood, Madonna admitted fame and fortune does not always equate happiness. “Is this something that you feel you learned yourself from the progress of becoming a celebrity, seeing all the material things that you can gain?” asked Access Hollywood’s Nancy O’Dell. “Yes, having all those material things that everybody wants and longs for, strives for, and dreams about and then realizing that none of those things bring you happiness. They don’t solve the problems. They don’t eliminate chaos in your life,” said Madonna.