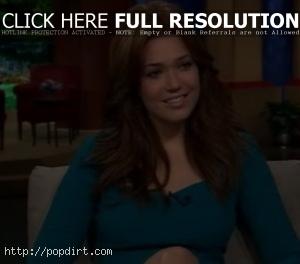 ‘The Early Show’ co-host Hannah Storm spoke to actress-singer Mandy Moore about working with Robin Williams in her new film, ‘License to Wed’, and her new album, ‘Wild Hope’.

On taking control of her career, Mandy said, “I feel like I’ve really come into my own, especially the last year or so. I signed a record deal with I was 14 so in a way I’ve always felt like I was in an adult world and had the responsibilities that many people my age don’t have, but just recently I felt that I have to be behind everything I do 150%.”

As for how she’s kept out of trouble, unlike some of her female peers, Mandy said, “I think that I genuinely feel so lucky to get to do what I do, that there’s part of me that would never do anything to jeopardize this opportunity. It’s not my cup of tea anyway at the end of the day. I work really hard at what I do and I’m tired at the end of the day.”

Asked what it was like working with Robin Williams, Mandy said, “Exactly what you would expect it to be. I mean he’s just incredible and such a gem of a person, but he has a lot of energy. You can’t go toe to toe with him. He’s a comedic genius. So I knew in the movie I was the straight man. I’m the girl and just sort of sit back. I had a free stand-up show on the set every day. It was perfect.”

When questioned what she set to do on her new album, Mandy said, “I set out to make a pop record that I could listen to. I’ve been pretty vocal about not liking some of my past efforts musically, but I got to co-write with a bunch of incredible indie artists like The Weepies, Rachael Yamagata, people that I really love and respect and I think it added this sort of folk, alt-country, pop element that I’m really proud of.”