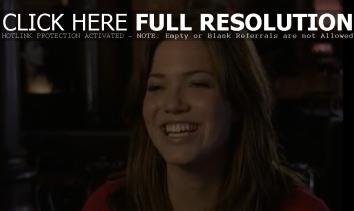 Mandy Moore has plenty to feel good about, having co-written every song on her heartfelt folky comeback disc ‘Wild Hope’. She spoke with ‘Access Hollywood’ about the project and pressures in Hollywood to be thin.

“Co-writing every song on the record obviously I feel a personal investment that I’ve never felt before,” Mandy said about her latest project. “It makes it all the more exciting. It makes it all the more nerve wracking. Performing live and actually singing my own words is off the charts to me. I’ve never felt that way as a performer on stage, and it being my favorite thing to do. My favorite part of the job. It’s just unbelievable now to be more excited to be going on stage and performing live. There also feels like there’s a little bit more at risk. That’s a new feeling for me as well. I can’t really detach myself from the music because I do have this personal investment in it now.”

As for those who may not like Mandy’s turn from pop to the singer songwriter genre, she said, “I just think that bad reviews or people not responding to the music hurts my feelings a little bit more this go around, because they are my words. They are my sentiments.”

Talking about her bubblegum pop past, which she has candidly disavowed, Moore said, “I’ve been pretty vocal about not being the most proud of some of my previous musical efforts, but I was 15, so I sort of chalk it up to being young and not having a lot of creative control. At the same time, I acknowledge it was a great platform to start and it’s the reason I’m around today. I’m just happy I’m sort of allowed the opportunity to evolve and to be a part of the writing process now and to really put my stamp of approval on everything that I’m doing musically.”

Watch the segment below the cut.