Mandy Moore ‘Have A Little Faith In Me’ Video 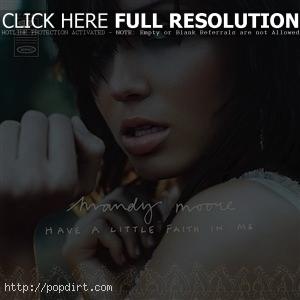 Mandy Moore’s ‘Have A Little Faith In Me’ video was shot in Prague on Mandy’s only day off from her new movie. Watch the video for the first single off the actress/singer’s forthcoming ‘Coverage’ album, below.

September 2, 2003 – The New Yorker reports that during Andy Roddick’s first match at this year’s U.S. Open, his parents, Blanche and Jerry Roddick, turned up at Arthur Ashe Stadium along with Stacy and Don Moore, the parents of his girlfriend, Mandy Moore. They were escorted to an air-conditioned luxury suite, equipped with a stocked refrigerator, sofas, television, bathroom, and a private terrace overlooking the court.

September 1, 2003 – Us Weekly quotes Mandy on her early fashion sense saying, “I discovered clothes at 11. I remember going to Gap Kids and thinking, ‘Wow, you can match things and mismatch them’. I finally got it. This is what being female is all about!”