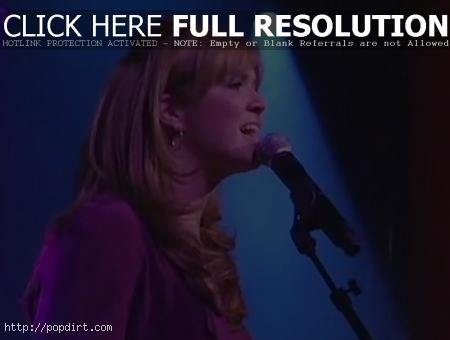 Mandy Moore posted video footage of her keyboard player Daniel Clark being presented a birthday cake at one of her shows earlier this month. The singer writes, “Surprise! I think we made him blush… hee hee. I love birthdays! Only 188 more days until mine.” Video of the moment at Buzznet.com has since been removed.

September 30, 2007 – Mandy is coming back to Las Vegas on October 7th to perform at House Of Blues. Mark and Mercedes in the morning on Mix 94.1 talked with her on Tuesday morning (September 25). Mandy talked about not getting many free clothes from designers, her Mblem. clothing line, appearing on the season premiere of ‘How I Met Your Mother’ – but not naked, touring, trying to get sleep, being unable to keep up with her partying band, the tabloid stories about her, when others (ie. Wilmer) say tacky things about her, appearing on Perez Hilton’s show, and more. Audio at mix941.fm has since been removed.

September 28, 2007 – Mandy talked to ‘The Early Show’ host Hannah Storm about a guest role in ‘How I Met Your Mother’, her upcoming movie ‘Dedication’, and her latest album ‘Wild Hope’. “They approached me, and I feel very lucky because I’m a big fan of the show,” Moore said about her guest stint on ‘How I Met Your Mother’. “It was the perfect way I guess to play against type. I play this sort of crazy, rebellious rock and roll chick with tattoos. I get to make out with Ted, the main character. So it was a great introduction to a whole group of strangers.” Watch the interview, aired last week, at CBSNews.com.