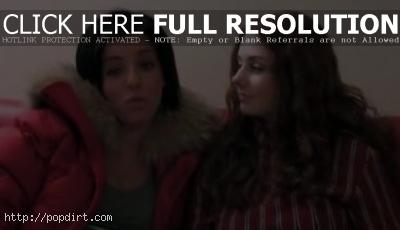 Julia Volkova and Lena Katina of t.A.T.u. checked in fans with a MySpace video message on Monday (December 24). “Well, guys, we wanna say Happy New Year,” Volkova said in Russian. “What to wish… to wish happiness and health is kind of simple. You’ll have them anyway! Unfortunately, we can’t get you the album [‘Upravleniye Otbrosami’] as a gift. It’s a little delayed. It’s not going to be released December 25th and is postponed until the spring. But I think it is even better, because…”

Lena then said of her pregnant pal, “But Julia will give another present to all of us, very very soon!” Julia continued, “There will be a surprise, we plan to release the single after the New Year. It’s all coming. Please cope with your impatience.” Lena then said, “And don’t forget to manage waste in the New Year.”

Then transitioning into English, Julia said, “Merry Christmas and Happy New Year.” Lena continued, “Be happy, be healthy, be wealthy, be in love and don’t forget to manage waste.” Watch it below.