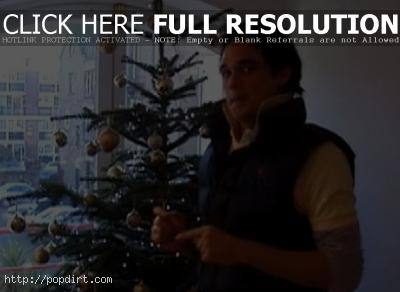 ‘Pop Idol’ season one runner-up Gareth Gates checked in with fans in front of his Christmas tree, wishing them all a Merry Christmas and Happy New Year.

“Oohhh it’s freezing,” Gates said. “It’s that time already. Winter and almost Christmas. In fact, before you caught me I was playing with my Christmas baubles, which is nice. I just wanted to wish you all a very merry Christmas. It’s been a fantastic year. It’s been a great year for me and a great year for you guys, and next year I’m sure is going to be even more exciting. There’s lots of exciting things which I’m bursting to tell you about. Have a great Christmas, eat lots, drink lots. I certainly will be. See you in the new year.”

June 18, 2007 – ‘Pop Idol’ season one champ Gareth Gates checked in with fans on his blog at MySpace on Monday (June 18). “Hiya! Have u all seen www.eyetuna.com,” he asked. “Aren’t my fish beautiful? Thank you for all ure name suggestions by the way. In case you haven’t seen the video in the Gareth section we chose Bubbles and Wonda! We’ve had a great response from some of you already… watch out for more fish news! In fact the fish are so popular they have their own myspace page. Lol! www.myspace.com/eyetuna. And before I forget… where are all your fish face pictures? I’m waiting to see what you all come up with!”

June 8, 2007 – Popjustice caught up with ‘Pop Idol’ season one runner-up Gareth Gates, asking about how he felt when his first record label dropped him. “It was hard at first, but it is funny how life spins itself around and I’ve signed a bigger, better deal now, plus I’ve been given more freedom,” he responded. “I’ve got more involved in the record, creatively, this time around.”

Asked what steps he’s taken to make sure he doesn’t get dropped again, Gates said, “I’m working as hard as I can at my end and that’s all I am able to ask of myself. I’ve always been with 19 Management and Simon Fuller has always believed in me, so even when we did move away from BMG, we knew there would be another deal waiting for me.” Read more.

April 14, 2007 – Balloon boobed pin-up Jordan tells Neil Sean of Sky News she has no plans to accept Gareth Gates’ recent offer to meet up with the ‘Pop Idol’ season one runner-up after their famous fling which he initially denied, but since admitted otherwise. “No thanks, he lied about about me and I don’t forgive or forget,” Katie Price said. “He must have a new single out, that’s why he’s talking about me.”