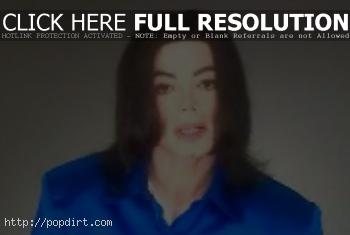 Michael Jackson has released a video on his official website in response to the recent leaks of grand jury transcripts. The King of Pop stated:

In the last few weeks, a large amount of ugly, malicious information has been released into the media about me,” Jackson said. “Apparently, this information was leaked through transcripts in a grand jury proceeding where neither my lawyers, nor I, ever appeared. The information is disgusting and false. Years ago, I allowed a family to visit and spend some time at Neverland. Neverland is my home. I allowed this family into my home because they told me their son was ill with cancer and needed my help. Through the years, I have helped thousands of children who were ill or in distress. These events have caused a nightmare for my family, my children and me. I never intend to place myself in so vulnerable a position again. I love my community and I have great faith in our justice system. Please keep an open mind and let me have my day in court. I deserve a fair trial like every other American citizen. I will be acquitted and vindicated when the truth is told.

Nickname Given To Jackson Trial

January 27, 2005 – Michael will finally go on trial on Monday, charged with sexually abusing a then 13-year-old boy. Professor Michael Brennan, a criminal law expert, tells Reuters: “It’s an uphill battle for the defense but ultimately the prosecution is going to have to depend upon a minor victim witness and we just don’t know how that individual is going to appear in terms of his credibility.”