The Santa Barbara County Sheriff’s Department has released the mug shot of Michael Jackson after he turned himself in earlier today on child molestation charges before posting $3 million bail and being released. 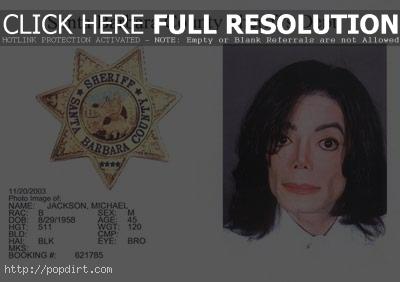 November 20, 2003 – Roger Friedman of FoxNews.com was on Fox News Channel earlier today to talk about details he’s learned in the molestation charges against Michael Jackson. The network again tried to further identify the alleged victim, with the host asking if the person in the Martin Bashir documentary was the victim, which to his credit Friedman refused to discuss. Video has since been removed from FoxNews.com.

David Letterman Joins In On The Jacko Jokes Fun

November 20, 2003 – David Letterman joked during his Late Show monologue on Wednesday night, “As you know, federal agents raided Michael Jackson’s Neverland Ranch out in Santa Barbara yesterday. If he’s not careful, this is the sort of thing that people might start to think he’s peculiar. Michael was so upset that he contacted Rush Limbaugh’s housekeeper to get some sedatives. Michael Jackson’s spokesman said that he had no comment because he didn’t know what the raid was about – well, that makes him the only one. It was a huge deal. There were over 60 feds on the ranch property – they didn’t find much, but they did find O.J.’s knife.”