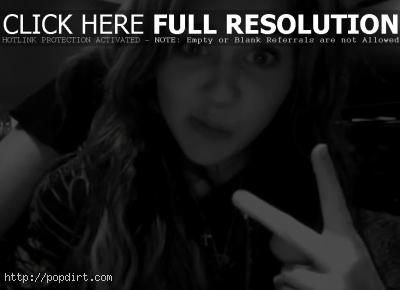 Miley Cyrus checked in with her Twitter followers (@MileyCyrus) on Friday after video footage surfaced from the star’s vacation stop in Costa Rica, where the 19-year-old was seen trying to board a helicopter with her boyfriend Liam Hemsworth, stopping first to pose for photos before telling Liam they had to get going. When Miley walked away, one “fan” yelled out, “A**hole!” Miley then turned around and told the rude person, “What the f**k? Are you for real?” Watch it via YouTube below.

Been trying not to tweet & just enjoy the holidays but just to clear something up I would NEVER swear to a fan. When someone yells something SO rude making ME look like an “a**hole” in front of fans who I am more than happy to take a picture with I can’t tolerate that kind of rudeness. Everyone who was there apologized for the woman’s brusque behavior. She obviously wasn’t a fan. Hope everyone has a Merry Christmas! LOVE TO ALL!