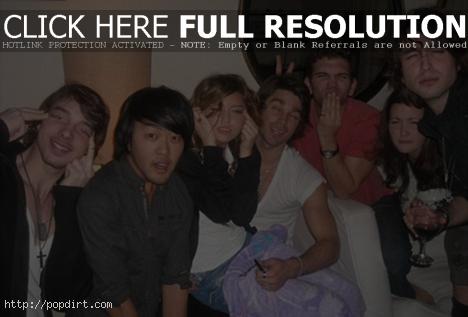 Miley Cyrus is responding to criticism of a recent picture of her that leaked onto the web featuring the ‘Hannah Montana’ star using her fingers to slant her eyes along with her boyfriend Justin Gaston and some other friends as they posed with an Asian man.

“The photo falls within a long and unfortunate history of people mocking and denigrating individuals of Asian descent,” the Organisation of Chinese American (OCA) said. “Not only has Miley Cyrus and the other individuals in the photograph encouraged and legitimized the taunting and mocking of people of Asian descent, she has also insulted her many Asian Pacific American friends. We hope that Miley Cyrus will apologize to her fans and the APA community for this lapse in judgment and takes the opportunity to better understand why the gesture is offensive.”

Cyrus wrote to fans on her official web site:

I’ve also been told there are some people upset about some pictures taken of me with friends making goofy faces! Well, I’m sorry if those people looked at those pics and took them wrong and out of context!

I feel like now that Britney is back on top of her game again, they need someone to pick on! Lucky me! haha Anyway, I just wanted to let you guys know what is on my heart. You guys know me and have been by my side every step of the way!

You guys know my heart and know the most important things to me are my friends, family, fans, and GOD! In NO WAY do I want to disappoint any of you! But, when I have made mistakes in the past, I feel like I’ve owned up to them and apologized.

I really wish everyone would stop focusing on my personal life and get back to focusing on what I love! Music and Acting! Hopefully, I will be touring again this fall! Yayy! =] It will be a nice change to be back out on the road again!