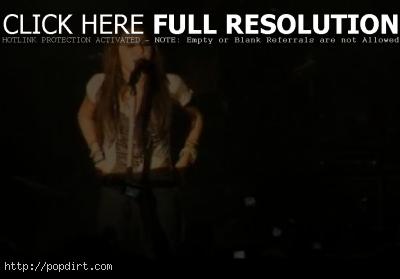 Miley Cyrus appeared to take a stab at ex-boyfriend Nick Jonas of the Jonas Brothers during a concert in Paris, France on Friday (October 31) at Showcase.

The ‘Hannah Montana’ star introduced her new single ‘7 Things’ (a song widely believed to be seven things Miley hates about Nick) telling the audience, “For all the girls, I guess guys out there too that hate their ex-boyfriends, or your current boyfriend, I guess either one’s unfortunate.” After the performance, Miley told the audience, “I still hate you”, presumably the subject of the song and not the crowd.