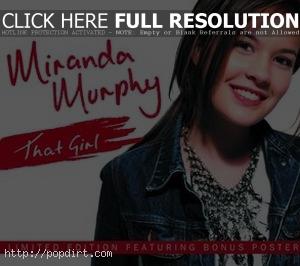 Australian ‘Popstars’ runner up Miranda Murphy has released her debut single and video for her new song ‘That Girl’. During the video, she disses artists such as Madonna, Avril Lavigne, Kylie Minogue, Christina Aguilera, and Britney Spears — or at least dresses up as them. Universal Music has since removed the video at YouTube, but a performance by Murphy is available below.