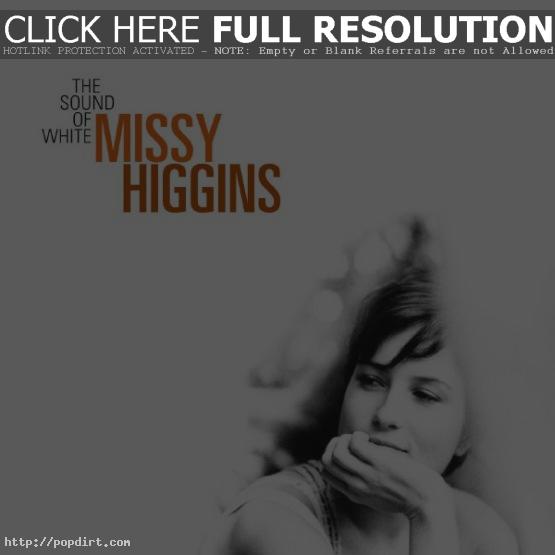 Popdirt.com caught up exclusively with Missy Higgins before the Australian singer-songwriter releases her debut album ‘The Sound Of White’ in America on May 24th. Higgins discussed the challenges of breaking the U.S. music market, raising money for tsunami relief, what she thinks about fan websites, her upcoming tour schedule, being a vegetarian, and more. Read on for the interview transcript.

Popdirt: Do you believe that your music will be able to penetrate
an American radio market that is so heavily dominated by Hip-Hop/R&B?

Missy: I don’t know…I hope so! I think these days, more than ever,
people are looking for music that makes them feel something. They’re looking
for music with lyrics they can listen to and connect with, and so the ‘Singer-songwriter’
genre is slowly becoming more mainstream. So I think if my kind of music
was ever able to make sense in America then now would be the time.

Popdirt: It sounds like you’ll be on the road a long time promoting
‘The Sound of White’. If Ten Days ended up on a song, how are you preparing
for so much time away from home? Will you be joined by friends and/or family?

Missy: Ten Days was written when I was overseas on my own just after
a break-up. So that was an out-of-the-ordinary experience for me and one
that would make most people miss home. In general I really enjoy touring
and traveling, especially when I have my tour-manager (also my best-friend)
and my band on the road.

Popdirt: You helped raise nearly $2 million (US) for tsunami relief
performing for WaveAid, what was it like to present that large of a check
to those charities and knowing how much it will help those in need?

Missy: It was a really great feeling. The entertainment industry can
seem so superficial sometimes, and occasionally I find myself wondering
what the point of it all is. But then I find myself able to participate
in something where I could physically see the difference it made (and hand
it to the charity myself) was a very rewarding experience. I realized that
I’m extremely lucky to be in the position I’m in.

Popdirt: What will be the first single you’ll release in America? What
was the decision process selecting the track and is it your favorite song
on the album?

Missy: I’m not too sure at the moment. I think it will either be Ten
Days or Scar. It’s hard picking a single, especially when you don’t really
know much about the market you are about to enter. In this case I think
I’ll just let the record company decide because I’m proud of all my songs,
and the ones that are my favorites (Night-minds, Any day now) wouldn’t
be suitable for radio and I realize that.

Popdirt: Outside of rock bands, most international artists have had
trouble cracking the American market no mater how successful they are at
home. Are you approaching the U.S. release with an expectation of success
or are you just going to view it as icing on the cake and c’est la vie?

Missy: I’ve never been one to have high expectations, that’s just setting
yourself up for disappointment. I would really love to reach the kind of
success in America where I can tour nice venues and play to a generous
amount of people. However it’s never been a make or break thing for me.
If everything fails success wise I’ll just be back where I started: writing
songs and playing music for no other reason than because I love it…

Popdirt: Do you prefer to play a few songs to large crowds on a festival
style tour or intimate crowds at small venues as a headliner?

Missy: There are great things about both. It’s a different kind of high.
When playing at a festival to tens of thousands of people it can be an
amazing vibe, especially when everyone is having a really good time and
the crowd is really receptive. And when playing to a small crowd in an
intimate venue it’s completely different. If it’s a good gig, you feel
like you and the audience are breathing together and going through every
wave of emotion together. They’re both beautiful experiences.

Popdirt: I checked in with fans on one of your fan site forums at MissyHiggins.org,
first off, how do you feel about having people talking about you, your
life, and your music on the web?

Missy: It’s extremely strange. I was very scared of them until very
recently when I went on and thanked them all for their support. They were
all so nice and it made me realize that they’re not all crazy stalkers!
They’re actually very sweet people. However I don’t think I’ll be making
a habit of going to those sites, it just feels a bit unnatural!

Popdirt: Of course many wanted to know, especially those in Australia
and New Zealand, your tour plans after you get done with your U.S. tour
with Ray LaMontagne in April… How is the schedule shaping up for the
summer, or is that still undetermined?

Missy: After the tour with Ray I’m going straight to Australia to do
a couple of weeks worth of touring, to finish off the major tour. Then
I’m going straight to New Zealand for my first lot of headline shows there.
THEN, I’m back to LA at the beginning of May for some shows, then for most
of May and June I’ll be in either the US or the UK as I’ll be releasing
my album there.

Popdirt: Others wanted to know if you are really a vegetarian and if
so, what prompted the decision.

Missy: I was a vegetarian in my early teens for ethical reasons. Then
a couple of years ago I went out with a guy who was a vegetarian so I eventually
stopped eating meat as well. Now, I’m not completely sure why I’m a vegetarian.
I think it has something to do with the fact that I just prefer vegetables,
and also that I hate the idea of an animal being kept in a tiny cage just
to be fattened up to eat. I think that’s disgusting and cruel.

Popdirt: And while Americans haven’t heard any of your music yet, those
back home are already wondering about a new album. Will you be doing some
songwriting while on the road?

Missy: I’m always writing, on paper or inside my head. It’s hard sometimes
to find the time, especially as things are very busy at the moment. It’s
even harder to find the time to play piano (my main instrument) – guitar
is a much more portable instrument. But ever since I recorded the first
album I’ve been writing songs and I can’t wait to record the next album.

Popdirt: Finally, what has been your most embarrassing on-stage moment?

Missy: I was playing a really intimate gig at the Sydney Harbor Opera
house and in the middle of a song I let out a really loud burp!! I burp
a lot on stage as I swallow so much air while singing, but never loudly
and never into the microphone!! I laughed it off though, and luckily for
me, the audience laughed with me…

For more on Missy Higgins, visit her official website, MissyHiggins.com.