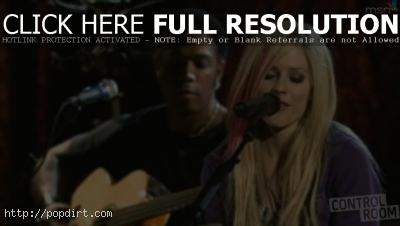 Avril Lavigne performed a special concert at The Roxy Theatre in Los Angeles on October 16th for MSN Music In Concert. Watch the live set that includes performances of ‘Sk8er Boi’, ‘Girlfriend’ ‘My Happy Ending’, ‘Innocence’, ‘Don’t Tell Me’, ‘Tomorrow’, ‘Hot’, ‘Losing Grip’, ‘Complicated’, ‘Adia’, ‘Nobody’s Home’, ‘Knockin On Heaven’s Door’, and ‘Keep Holding On’, as well as an interview, at MSN.com.

November 21, 2007 – While her husband Deryck Whibley recovers at home from a back injury, Avril tells OK! magazine she’s planning a big holiday season. “I’m going to be entertaining this year,” the singer said after performing on ABC’s ‘Dancing with the Stars’ results show on Tuesday night. “I’ll be the host and having all my family over and cooking and everything.” Asked what her best dish is, the Canada native responded, “I make really good butternut squash. I put it in the oven with rosemary, brown sugar, and honey on it. But if you want to be healthy, just put rosemary, olive oil, and pepper on it.” Read more.