‘My World’ With Rachel Stevens

‘My World’ featuring Rachel Stevens aired on T4 Sunday, a documentary following the former S Club star around over the summer. Clips include Rachel working out, being presented Glamour magazine’s Woman of the Year Award by Backstreet Boys star Nick Carter and Howie Dorough, Rachel in the studio recording ‘So Good’, her T4 performance, enjoying dinner with her dancers, the ad she did for testicular cancer screening, a visit to the supermarket, and more.

Rachel Stevens’ Latest Deserves To Be A Hit, But Will Likely Flop 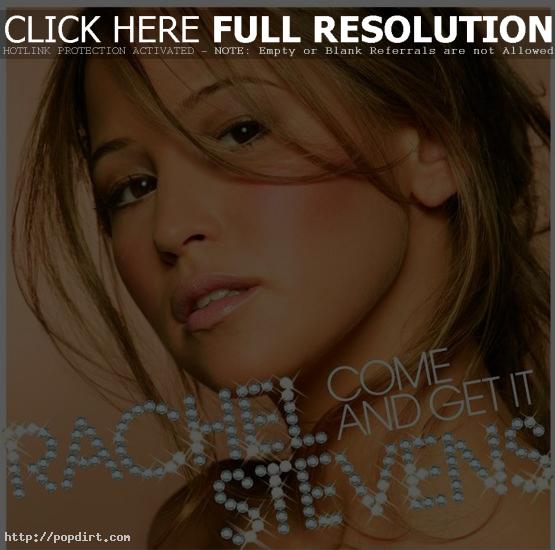 October 17, 2005 – Alexis Petridis of the Guardian reviewed Rachel’s new album ‘Come And Get It’, released today, giving it an impressive four out of five stars, but giving most of the credit to the disc’s “stellar team of pop producers”.

Petridis writes, “Whatever Stevens’ shortcomings, ‘Come and Get It’ deserves to be a hit. It is packed with brilliant, cutting-edge pop music. Instead, it seems more likely to end up a very 2005 kind of failure. Stevens may be the first pop star in history to have been media-trained out of a job.”

October 17, 2005 – Rachel has revealed it would be a dream come true to be Daniel Craig’s Bond girl. The former S Club star told The Sun, “I would love to be Daniel Craig’s Bond girl. I’ll think he’ll be great in ‘Casino Royale’. It would be my dream job… totally fabulous and so glamorous. I love getting glammed up! I’d love to move into acting a bit more and the Bond films are classics. Some of the most famous movies around.”

September 18, 2005 – The Mirror reports that Rachel has arranged a date with Lottery host Dale Winton. The pair swapped numbers at last week’s GQ Awards, after Dale heard that the former S Club star was on the lookout for a gay best friend. “They’ve already arranged to go to Rachel’s gig at the G-A-Y club together,” a source said. “It could be the start of a beautiful friendship.”

September 7, 2005 – Ann Montini of Sky News reports that Rachel is featured in a television special next month, but the former S Club star removed a scene in which she’s seen crying after a phone call. “She won’t reveal why or who was on the phone, just that she wanted it taking out,” a source revealed.

September 2, 2005 – Rachel fan site RachelStevensOnline.com reports that the video for the former S Club star’s next single ‘I Said Never Again (But Here We Are)’ is directed by Trudy Bellinger, and is set in a women’s prison after Rachel is wrongly accused of a crime. They write, “The video combines attitude, high energy dance routines, fun and female feistiness with the glamour of pop that is synonymous with Rachel. Apparantly it will be filmed on the ‘Bad Girls’ set as well. The video should hit music channels within the next week or so, so make sure you keep your eyes pealed!”