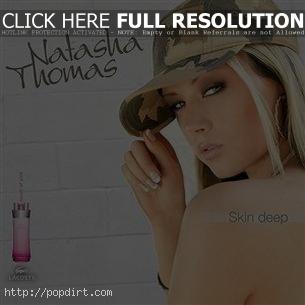 Natasha Thomas checked in with fans on her MySpace blog on Monday (March 13). She writes:

Hey Everyone, I can’t believe I haven’t written in a while! It seems like it’s been forever since anything interesting has happened in my life…well, ‘Skin Deep’ is all set to be released in England on March 27, and the album should follow shortly afterwords. I’ve been reading scripts for a film role, but nothing has jumped out at me so far… I don’t think I want to do a horror movie, maybe something dramatic. What do you think? I added a friend of mine, Sarah Whatmore, on MySpace, she’s a sweet girl who’s getting all ready to release her CD, so check her out too! In terms of the U.K. after ‘Skin Deep’ is released the second single will most likely be the bluesey, soulful ballad ‘State of Mind.’ I cannot wait to film the video for that one! I’ve put Germany on a temporary hiatus, I’m having a bit of trouble finding a German distribution partner and until I do I’m afraid a new single won’t be released there! I’ve signed deals to release in Asia, South America, Australia, and other parts of Europe though… so we have that to look forward to! Well, I better get back to bed to try and get a little sleep, I have a big day tomorrow! I hope everyone is doing fine. Love & kisses, Natasha xoxo

Update: Natasha Thomas fan site claims this myspace is fake. “The Message of myspace is not from Natasha.She doesn’t have a myspace account. [Natasha’s manager] Ginger wrote me an e-mail with this important information.” – natashathomas.de