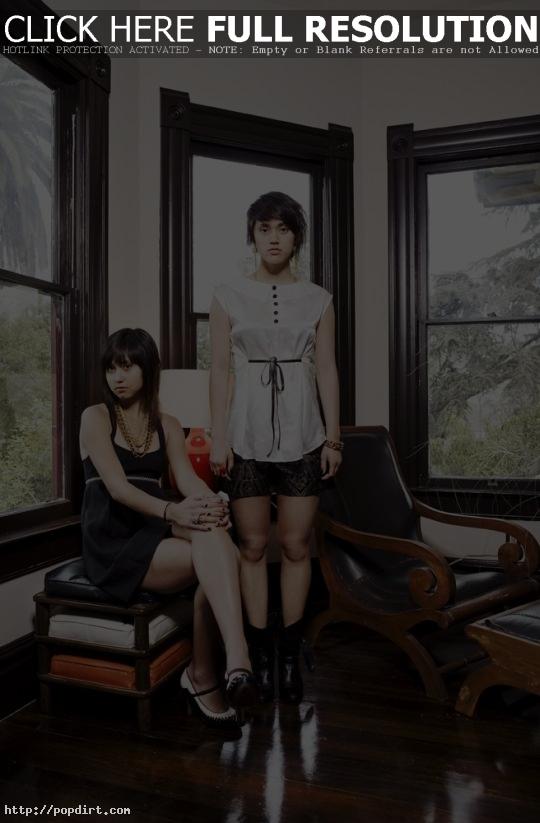 Dia Frampton of Meg & Dia updated fans on the group’s blog at MySpace (@megdia) on Tuesday (October 21) about plans to post a new song on Friday, which will be featured on the charity compilation album ‘Take Action’. She writes:

So, now to the song business. Blah. Music.. the boring part AGAIN! I am still trying to beg Warner Bro. to just hire a freakin’ team of song writers for us. As I am sippin on my lemonade, they keep bothering me, and I always reply with, “What? You mean I actually have to WRITE songs too?”

But anyhow, after the lemonade, (and gingerbread) And NOOOO FOOD FOR 7 DAYS! (Uhm…yeah, went on a little spiritual, mind bending fast…uhm, long story. Crazy. And tomorrow is the last day..And let me tell you, my mind is sooo clear now!. I mean, I am constantly seeing birds dancing around my head in a halo, and…oddly enough, floating chocolate cakes…!!… like saucers… everywhere in my house. No one else sees ’em. So I decided fasting makes you insane. For all you very religious people out there… gee whiz. I commend thee, and I am so sure God does too!

Focus. Song. Song. (sorry, I end tomorrow. No food…. This computer screen…oddly looks like a banana split. And you see it too? Thank Goodness! Whew!)

The Song is called, “Halloween.” (Oh how convenient! Ya, we actually have some more songs in the works lately. Meg and I have been feeling really emotional and musical lately. We have new songs called, “Turkey day” and “The 4th of July” as well.

No. No no no no. No. NO. The coincidence that it is October, and the coincidence that the song is called Halloween, are simply…well, coincidence. Ok? We do not see Pumpkins in the street and run home to our guitars because we are so inspired to write. Sorry. We don’t. That is why we have bands such as X and also, another, exhibit X. (Not gonna name names. I am not that big of a wiener! I hope. My mom says I am not). (By the way, my mom, ((who is Asian and says…uh, funny English things sometimes)) (It is her second language! Give her a break!) said, the other day, as my little sister came limping in from basketball practice with a sprained ankle.) “Oh Yoboe (that means, sweetheart in Korean), Nikki twisted her winkle!” If you don’t find that funny. Don’t listen to our music. I can’t stand the thought of someone listening to our music without a sense of humor.