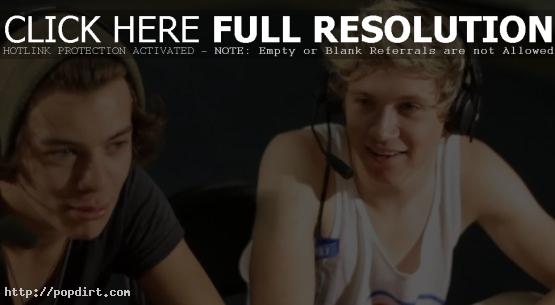 Niall Horan and Harry Styles from One Direction sat down with Bert and Kristin from The Bert Show before their Atlanta show on June 26th at Gwinnett Arena. The pair discussed their biggest turn-offs, how they were with the ladies before forming the group, switching bodies with bandmates, if they fight, weird things thrown on stage, rumors about them and much more.

Harry: On a girl, a turn-off for me, is spitting.
Niall: Someone that is too in-your-face. (I prefer) Someone that plays it cool and isn’t like, look at me, I’m hot.

If it was harder with the women before One Direction:

Harry: I was alright. I had girls in school who were my friends. I was doing okay.
Niall: Just fine

What their world is like now with the ladies, Harry said:

I would hope that any women that I meet across the path would like me for me.

If Niall could switch bodies with any of his bandmates:

I think I’d swap with Harry, because I’ve got a really fast metabolism, and I can’t seem to put on any weight. I can eat your dinner and your dinner. He’s got this metabolism that he can pick what weight he wants to be, like a boxer.

If they’ve ever gotten in a fight with each other on the bus, Harry said:

We squabble, but it is so funny. Comedy. The worst one was I accidentally hit Liam in the face with a shoe, but it didn’t go much further than that. The thing is, if Liam gets hurt, he doesn’t get really angry, he just (growls). I remember last time I stood on his broken toe, and he went ughhhh! Yeah! Yeah! Yeah! That was it.

I had one the night before in Houston, see the crowd thinks that we can see them, just because they can see us, but we can’t see as far as when the spotlights come. We can only see as far as the spotlights are. I’m standing on the side of the stage, and this iPhone, with tape and a house key stuck to it comes flying at me and I see it at the last second and I slap it down. Otherwise, it was gonna break my collarbone. There was a rude note attached to it.

If Harry was a teenage girl, which group member would he have a crush on:

I think if I was a girl, I probably have a crush on Zayn (Malik). He’s just pretty isn’t he? His cheekbones.

If they fight over women, Niall said: